This post’s title is an amalgam of the titles of two blog posts released today, and coincidentally, both posts use the same cartoon to illustrate their point: 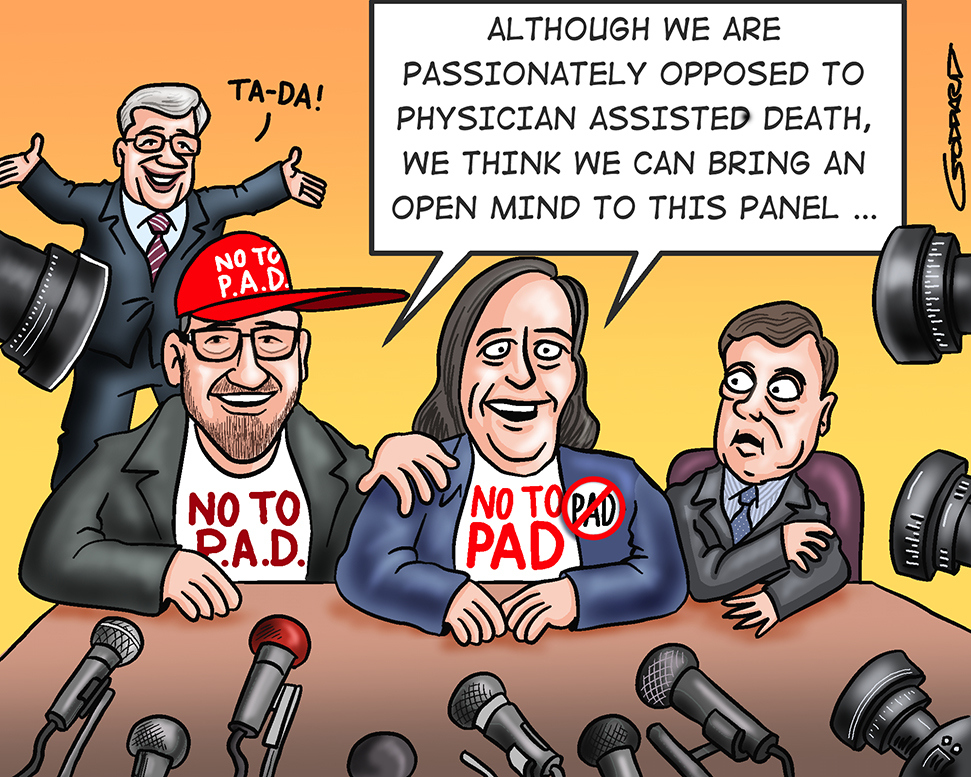 Eric MacDonald’s post, “Harper Does It Again … Is This Really What The Supreme Court Had In Mind?” contains a short explanation of the cartoon, and lets the cartoon paint a thousand words and impressions. MacDonald’s post complements his earlier post, “An Open Letter to Harvey Cochinov and Catherine Frazee Regarding their Appointment to the Aid in Dying Panel.” MacDonald’s letter is short and to the point:

You both have impressive credentials and are very capable spokespersons for the segment of Canadians who oppose physician aid in dying. You have represented that constituency admirably in the Carter case, in your writing and in the media. You both have been clear and consistent in your opposition, and for that you deserve credit.

But why would you allow yourself to be appointed on to a panel, which you will effectively control and which will make recommendations about the enactment of legislation that you utterly oppose. It is such a self evidently egregious misfit and abuse of governance that it will be a lightening rod for ridicule, and unfortunately so will you. Your appointment may serve a political purpose for the government, but surely it will not be beneficial to you.

Your best interests are served by resignation from the panel. Continue to advocate and educate but don’t sully yourself by being the front man and woman in a political farce.

Elizabeth Jane Banks’ guest post, “Harper Puts Politics Before Democracy – Even In Matters Of Life and Death” on Udo Schuklenk’s Ethx Blog is longer and highlights the fact that

The three-member panel includes two individuals who were expert witnesses for the Crown in the Carter Case regarding the right to die with dignity.

The “two individuals” are Dr. Harvey Chochinov and Dr. Catherine Frazee, who “argued against the right of Canadians to have access to physician assisted dying.” Therefore, even though,

84% of Canadians, including the majority of supporters of all political parties, believe physician assisted dying should be legal,

two-thirds or 66.6% of the panel are not in favour of physician assisted dying!

Once again we see [Harper] subverting democracy. Now he shows he’s even willing to play politics in matters of life and death.

2 thoughts on “Harper Does It Again: Puts Politics Before Democracy”