In the late 1960s, Pierre Trudeau introduced his Omnibus Bill that made profound changes to 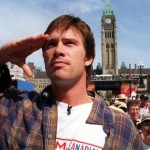 the Criminal Code of Canada. As detailed on Wikipedia, this bill:

Pierre Trudeau famously told reporters that, “there’s no place for the state in the bedrooms of the nation.” The moral arc had begun to bend toward justice in Canada and Canadians were proud. Decades later this pride could be seen even in our commercials in the form of the Joe Canadian Rant for Molson Canadian, circa 2000. A small sentence sat humbly between jokes about stereotypes and references to hockey:

I believe in peace keeping not policing, diversity not assimilation…

Sadly, that sentence is no longer true. We’ve certainly shed our peace keeper reputation (Canada’s role in Syria changed from “advisors” to  “bombers” within months) and with construction planned for a colossal monument to the victims of communism (we’ve written about that on Canadian Atheist here and here) and another monstrosity to “Mother Canada”, it’s like I fell a sleep during the Joe Canadian rant and woke up to find Canada had joined the Russian Federation!

The Harper government’s latest eerily Putinesque move, comes in the form of Bill C-24. Canada is overhauling its citizenship and besides making it tougher to obtain Canadian citizenship and tightening up language requirements, the bill also:

Just like that we now have second class citizens in Canada.

Moreover, although many will chuckle at my paranoia, it really is a slippery slope. Consider what the Globe and Mail pointed out about C-24 almost a year ago:

Under the new law, for example, Al Jazeera journalist Mohamed Fahmy could be stripped of his Canadian citizenship because he was convicted of terrorism by an Egyptian court. Ottawa has said it would not apply the law in Mr. Fahmy’s case, but the mere fact that it has had to answer the question should give us all pause.

Well, at least Canada is still:

…the 2nd largest landmass!
the 1st nation in hockey!

One thought on “O Canada Where For Art Thou Canada?”