In the wake of the Charlie Hebdo tragedy, I wrote a scathing criticism of the English-speaking media for their cowardice and their betrayal of both the victims and the principles of free expression. But what do Canadians at large really believe about the issue of protecting religious sensitivities?

More recently, Canadian Michael Ondaatje was among a group of authors protesting an award given by the PEN American Center to the Charlie Hebdo survivors, in recognition of their stand against intimidation. You’re probably tempted to try rereading that last sentence, in the hopes it might make some sense on the second or third read. Don’t bother. Their logic is as stupid as it sounds, and there are plenty of good writers who have laid bare the craven absurdities of Ondaatje’s “stand”.

And of course, the violence continues. Last week two assholes tried to shoot up an art exhibit showing images of Muhammad in Texas. In that case the people running the exhibit were bigots, but that doesn’t excuse the murder attempt. Wanting to murder people over cartoons is stupid enough; being baited by Texan Islamaphobes is Republican-presidential-candidate-level stupid.

Several writers – myself included – have pointed out that the Charlie Hebdo tragedy only occurred in the first place because of mainstream media’s cowardice in the wake of the Jyllands-Posten cartoon controversy. If showing Muhammad cartoons in the wake of extremist threats – or actual violence – had been normalized across the board right from the start, the threats and violence would have been self-defeating, and extremists would probably have abandoned the strategy. Think about it: What if every time Muslim extremists raised a stink about images of Muhammad, all news media was flooded with such images as part of the story – “in today’s news, Cleric so-and-so says showing images of the Prophet is forbidden in Islam… images much like this one, or this one, or this one….” If that happened every time the issue was raised, the extremists would stop raising the issue. (And most people would likely stop showing images of Muhammad if extremists stopped making it an issue, because there would be no point. You don’t see many people drawing images of Ganesha, after all.)

Instead, mainstream media has doubled down on its cowardice, and refused to show any images of Muhammad – even when they’re newsworthy – thus making the extremists’ strategy effective. So we can expect more threats and violence in the future. Great job there, guys!

Luckily someone thought to ask those questions. That someone was the Angus Reid Institute, who conducted a survey of more than 1,500 Canadians in the weeks following the Charlie Hebdo murders, asking them about the ethics of publishing Muhammad cartoons. 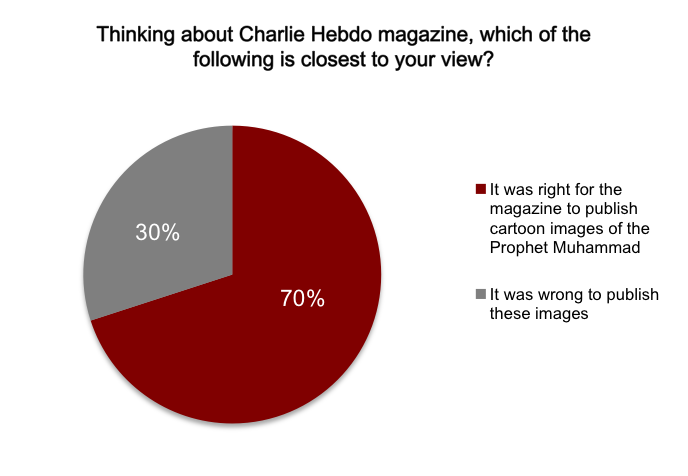 This would be interesting enough by itself, but there were some other interesting findings in the survey.

It turns out that one of the strongest predictors of support for Charlie Hebdo was how informed people were. Canadians who knew “a lot” about the attacks were significantly more likely (74%) to support Charlie Hebdo than those who knew “a little” (65%) or “nothing” (61%).

It also turns out that Charlie had significantly more support in Québec (78%), Alberta (73%), BC (69%), and Ontario (68%) than they did in Saskatchewan (64%), Manitoba (60%), and Atlantic Canada (59%). One finding that amused me was that people who voted Conservative and NDP were both equally likely to support Charlie (74%)… and both were much more supportive of free expression principles than people who voted Liberal (65%).

But that wasn’t the only question the survey asked. It also asked people to rate – on a scale of 1 to 10 – what is more important when balancing the issue, with “respect for religious feelings” at 1 and “freedom of speech” at 10. Here’s where I was really surprised. While Canadians like free speech, they are also far more willing than people in many other modern democracies to put limits on it – for things like hate speech laws, for example. I would have guessed that the score would come out roughly in the middle, and wouldn’t have been shocked if it leaned toward kowtowing to the religious.

Yeah, that’s right. Half of Canada says, “fuck yo’ religion, and fuck any compromise over it; free speech rules.” Not damn bad, I’d say.

One very interesting thing I noticed is that, once again, those who were more informed about the attacks were significantly more likely to support free expression over respect for religious feelings. Those who knew only “a little” or “nothing” about the attacks actually produced results more in line with what I would have predicted, largely taking the middle ground. In other words, religious extremists are pushing more people toward supporting free speech, and away from respecting religion. 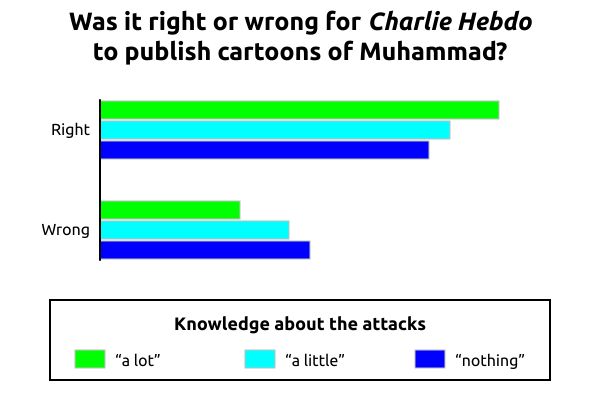 Support for Charlie Hebdo, compared with knowledge about the attacks

There was one other curious result that came out of the survey. In addition to asking “was it right to publish the cartoons”, respondents were asked: “Suppose you had been in a position to give advice to major Canadian news outlets on whether they should or should not have re-printed the same images, what would your advice have been?”

Despite 70% supporting publication, it turns out that when it’s on them to make the call, Canadians are much less bold. Only 56% would have advised republishing.

I don’t think that’s a shocking result, and nor do I think it calls into question the general support Canadians have for publishing the cartoons. What I think it demonstrates is how much courage it takes to actually make the choice yourself. To me, that result shows that Canadians in general have a great deal of respect for Charlie Hebdo, in that uniquely Canadian way: they are eternally grateful for what you’re doing, but at the same time thankful that they don’t have to do it.

The fact that more than half of Canadians appear to have more backbone than the leadership of our major news media outlets should be profoundly embarrassing to them, but I believe they’ve sunk so far into their own self-serving justifications for their cowardice that it probably won’t even reach them through the haze.

At any rate, 70% of Canada (±2.5%, 19 times out of 20, if you want to get technical) – notably the Canadians who are most informed and most educated – support Charile, and 56% would personally take responsibility for publishing them. Well done, Canada. Not bad at all.

One thought on “What do Canadians think about publishing images of Muhammad?”