Isn’t it funny how when it rains, it usually pours? After a drought in the statistics/demographics news of interest to Canadian nonbelievers, three reports get released in the space of a couple weeks. The first was the Angus Reid survey on Faith in Canada. The second was the massive Pew study on the Future of World Religions. Now the WIN/GIA group has something to add. However, they did something few surveys bother to do: separate the actual nonbelievers from the “Nones”.

Right off the bat I have to deflate your expectations. This wasn’t a real survey on religion. WIN/GIA (which is a group of polling companies scattered across the world) just does an annual survey that covers all kinds of stuff. It just so happened that the 2014 year-end poll included a question about religion:

Irrespective of whether you attend a place of worship or not would you say you are:

That’s actually not a bad way to ask the question. It’s not perfect, of course. (Though I assume the capitalization of “person” in option (a) is merely a typo in the report, and that the survey didn’t really ask people to choice between “religious Person” and “not a religious person”.) If it had been up to me, I would have avoided the strong negative (such as “not a (religious) person”) and gone with something more like “… would you say you are: a. religious, b. not religious, c. a convinced atheist…”. I might also have added an “a nonbeliever” option before the “convinced atheist” to catch nonbelievers uncomfortable with the “a-word”, and dropped the rather unnecessary “convinced” qualifier.

But they did two things really well. First, they made it clear that they weren’t asking if you are “religious” for cultural reasons or due to social pressures with the “Irrespective…” bit. That’s literally the opposite of what StatsCan does for our census (or “census”, as was the case last time). (See this 2010 blog post from CFI for some more info about what I’m referring to. Incidentally, the next census is next year; I’ll be writing more about that shortly.) Second, they actually took atheists seriously enough to mention them specifically. I’m not sure if the “convinced” part was really necessary, but many surveys don’t bother to ask about nonreligion specifically at all, let alone atheism – they just ask you to declare a religion, with “none” given as a “not applicable” way to avoid answering, rather than as an answer itself. (The Canadian census/survey is an example of this, sadly.)

How did Canada do?

It would appear we are more “not religious” than “religious” overall – and that’s not even taking “convinced atheists” into account. Not too shabby. As usual, males are much less religious than females.

No surprises here, either – the older you are, the more religious you are. The youngest adults are slightly more noncommittal than the 25–34 cohort, but that’s a good thing: there’s no rush to figure things out (I’m not a big fan of “get ’em while they’re young”). 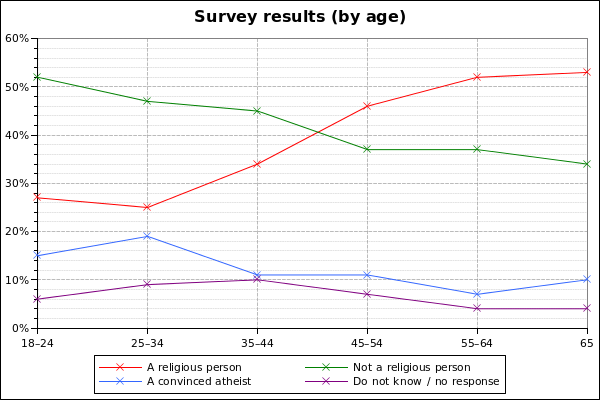 Religiosity across age groups in Canada.

I have to admit, this surprised me a little bit. Normally atheism is correlated with income, but here we see that low income Canadians were more likely to consider themselves “convinced atheists” than high or medium income Canadians – by a substantial margin, too. Granted, they’re usually the ones most screwed by religion – for example, being forced to pay for two school systems in Ontario – so I suppose it makes sense there would be substantial numbers of convinced atheists among them.

And there’s not really much of surprise here. Higher education correlates to less religiosity, but of course there’s the confounding factor that since higher education is so prevalent in Canada, most people who haven’t completed high school haven’t done so simply because they’re young.

Don’t take the results too seriously, though. First of all, the methodology wasn’t nearly as rigorous as for the Angus Reid survey released a couple weeks ago. Also, the data set for this survey was around three times smaller.

So while the results aren’t really of a high enough quality to take too seriously in isolation, they do generally conform to the results we see in other surveys. And I do give the study kudos for formulating the question well, and taking nonbelievers – and atheists – seriously in their own right.

If you’re interested in global results, Hemant Mehta at Friendly Atheist has written a nice post covering them quite well (as well as mentioning the American results). There is some interesting data there (*cough*bragging rights at the comparison between US and Canadian data*cough*), so I do recommend checking out what he wrote.