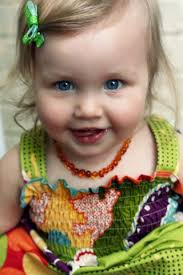 When parents head down a drugstore’s alternative medicines aisle, they’re trusting that these products are safe, and quite possibly effective. Holistic medicine is, they assume, gentle on the body, kind on the wallet, and made by wise folk who smell faintly of jasmine and aren’t particularly motivated by money. Except none of this is true.

An ubiquitous example what Margolis calls the  “what harm can it possibly do?” attitude is the amber bead teething necklace. Parents who wouldn’t leave a large button or a BIC Lighter within the reach of their toddlers subscribe to the claim that

when amber is warmed by the body, an analgesic substance called succinic acid is released by the beads and absorbed through the skin. Not only is there no scientific evidence to back up these claims, but placing beads around an infant’s neck poses the double risk of choking (should the necklace break apart and a bead becomes lodged in the child’s airway) and strangulation. France and Switzerland have banned the sale of this cute but potentially lethal accessory in pharmacies.

Educated consumers, who can’t discriminate between scientifically verifiable medical treatments and holistic hokum, need to be called out on their bad judgment.

she’s only partially right because all consumers “who can’t discriminate between scientifically verifiable medical treatments and holistic hokum” need to be educated so they can make good judgements about what works and what doesn’t and why.

One thought on ““Modern Parenting Has a Snake Oil Problem””