I launched The Non-Conference in November of 2014 with the rather bold intention that it would become an annual highlight in the atheist event calendar. With the success of the inaugural conference and the growing interest and excitement for the next, scheduled for August 2015, I am pleased to see that I was neither over-confident nor over-ambitious.

NonCon2015 is going to be the largest event of its kind in Ontario. The mission of the conference is to educate atheists and others about the issues of our day as they pertain to the intersection of religion and the public good, and to inspire people to become more engaged in their communities.

I was approached by speakers and attendees alike throughout the inaugural event and subsequently over the following days and weeks, telling me about their experience of the conference. Here are some of their comments:

“Standing ‘O’ and brought tears to my eyes.”

“To say I left feeling inspired would be an understatement.”

As much as the attendees felt inspired, they inspired me immeasurably. Committing my time, money, and energy to making NonCon2014 a reality was exhausting, and the overwhelming positive feedback is what re-energized me to start work on NonCon2015.

Early on, I knew I wanted a theme that was different from last year and more reflective of what has been going on in the world since the last conference. I also wanted another top-notch keynote speaker who would generate interest and excitement. Those efforts resulted in securing Lawrence Krauss as our keynote and focusing on issues related to freedom of speech and expression. 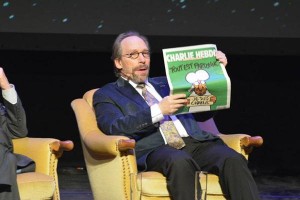 There are few in the atheist and scientific community who are not already familiar with Lawrence Krauss and why he is a ‘must-see’. In 2013, I had the great pleasure to hear Krauss speak at the Reason Rally on the National Mall in Washington D.C., and then again in a more intimate setting at the Imagine No Religion conference in Kamloops, British Columbia. While there, I asked him why he spends so much time on the road doing these kinds of events, and his answer was a simple one: He finds it too important not to talk about these issues. I couldn’t agree more. So this year’s conference theme is simple too: We must speak, and we must have the freedom to speak.

But how best to talk about how freedom of speech intersects with atheism, religion, and the public good? Well, you couldn’t read or listen to news reports or social media in the last while without hearing about blasphemy and people attacked or persecuted for thinking and speaking openly on issues that some in the world deem sacrosanct or taboo. The Charlie Hebdo assassinations became an international symbol of violence and terror as a means to repress free expression. For me, one man became the living, flesh-and-blood symbol of those persecuted by oppressive religious regimes merely for the crime of speaking out. His is an international story of free speech and resistance, and also a Canadian story that has hit us close to home.

Raif Badawi was arrested three years ago on the charge of insulting Islam, and prosecuted on several charges including apostasy. Raif is a writer and creator of the website Free Saudi Liberals. He was convicted and sentenced and then subsequently resentenced to a greater punishment of a fine of one million riyal (approx. $333,000 CAD), ten years in jail, and one thousand lashes to be excruciatingly meted out fifty at a time over twenty weeks. Raif’s wife, Ensaf Haidar, and their three children sought and received political asylum in Canada and have resided in Sherbrooke, Quebec for two years. Ensaf works tirelessly to advocate for her husband to be released and reunited with his family here in Canada. 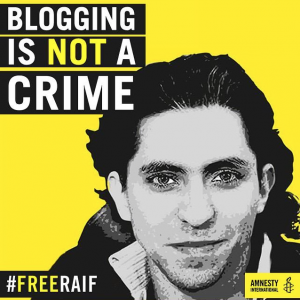 When I invited Ensaf to speak at this year’s conference, she accepted with grace and responded as if I was doing her the favour. I am honored to host her family and support them in any way I can. I hope the conference can play a part in furthering the efforts to bring Raif safely back to his family.

While it may come as a surprise, there still exists blasphemy laws even in non-theocratic countries around the world. Even Canada still has one on the books, although it has not been effectively used in decades. But there are many countries where these laws not only exist but continue to be used to oppress and persecute atheists and apostates, and people continue to been convicted and punished, often with imprisonment and sometimes with torture or execution. Over 200 atheist and secular organizations have allied to be a force to bring an end to draconian blasphemy laws everywhere. At the time of this printing, representatives from two Canadian groups that are involved in this movement are confirmed to speak at this year’s conference, and I anticipate the addition of others to our roster soon.

With all of that and more, I am confident that NonCon2015 is going to be a day of ideas and experiences that will stay with you for some time to come. This year, lunch and dinner will be catered on-site and all the speakers will be dining with the attendees. VIP ticket-holders will have the chance to get a little more time with their favorite speakers at an exclusive reception held the night before the conference. There are only 3 VIP tickets left available at the time of this writing, so you may still have an opportunity to enjoy the perks of ‘VIP’.

Ticket sales are brisk almost a half a year away from the event. The energy on August 22 should be palpable and inspiring. Come be part of this growing event and growing community, and join us in making The Non-Conference an annual tradition.