I am an organism that is a member of a social species capable of complex verbal communication. Social species are the powerhouses of evolution Cooperation is power and my species dominates the planet. This power comes at a price. We must cooperate and also minimize conflict between local members of our own species. Conflict within a tribe reduces the tribe’s competitiveness and weakens its ability to compete with other tribes or species it comes into contact with. Consider the following: 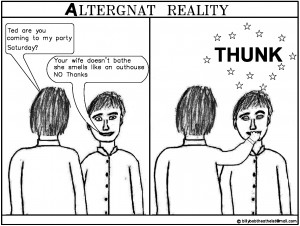 That would never happen to most people as the following scenario is much closer to what would happen in daily human interaction: 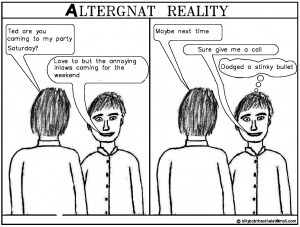 Behaviours do not evolve randomly. As we evolved, lying was selected for as it lowers conflict between members of a tribe. This is patently obvious, and I become bewildered when I hear someone denigrate lying. Do they not understand that lying is social grease that helps to limit friction within our society? Some social institutions such as politics and religion could not exist without lying. So forget the ninth commandment and remember this saying “a lie a day keeps social chaos away.” Go forth and lie. Be proud you are doing your part in making your society peaceful and powerful.

What is the correct balance of truth and lies? Natural selection will decide.