On March 6, I wrote a letter to Prime Minister Harper, Foreign Affairs Minister Rob Nicholson, and my MP, Gordon O’Connor.  Today, I received the following response:

Thank you for your email of March 6, 2015, regarding the case of Mr. Raif Badawi in the Kingdom of Saudi Arabia. The Office of Prime Minister Stephen Harper has also forwarded to me your email on this issue.

The promotion and protection of human rights is an integral part of Canada’s foreign policy. As such, Canada takes principled positions on important issues to promote freedom, democracy, human rights and the rule of law. Canada strongly upholds the right to freedom of religion, freedom of expression, and freedom of association, among other inalienable human rights, as the basis on which a fair and democratic society is established, thrives, and progresses. Canada is greatly concerned by the detention and sentencing of Saudi human rights activist Raif Badawi.

As a country based on pluralism, and comprising a multitude of cultures and faiths, Canada is uniquely positioned to protect and promote freedom of religion, as articulated in Article 18 of the Universal Declaration of Human Rights. For this reason, the Office of Religious Freedom is an important component of the Government of Canada’s ongoing global effort to advance Canadian values, including freedom, human rights, democracy and the rule of law. Canada has also consistently spoken out against egregious violations of freedom of religion, and denounced violence motivated by religious intolerance. On January 8, 2015, Dr. Andrew Bennett, Canada’s Ambassador for Religious Freedom, strongly denounced the punishment administered to Mr. Badawi.

On January 14, 2015, then Minister of Foreign Affairs John Baird also made a statement expressing Canada’s deep concern about the public flogging of Mr. Badawi and calling for clemency. Indeed, Canada remains concerned about the human rights situation in Saudi Arabia, especially with respect to the issue of religious freedom. The Government of Canada takes every opportunity to make its views on human rights and religious discrimination known to Saudi authorities and the international community. Canada supports a stable and prosperous Middle East, governed by freedom, tolerance and pluralism, where human rights, including minority and religious rights, are respected. Support for freedom of religion is an integral part of our ongoing work in promoting human rights.

Further, former Minister of Foreign Affairs John Baird discussed the case of Mr. Badawi with concerned parties, including Ms. Christine St‑Pierre, Quebec’s Minister of International Relations. He also raised Canada’s continuing concerns about this issue during a bilateral meeting with His Royal Highness Prince Turki Al‑Faisal, on January 21, 2015, at the World Economic Forum in Davos, Switzerland.

Canada has made representations to Saudi Arabia’s Ambassador in Ottawa, and Canada’s Ambassador in Riyadh has met with the Chair of the Saudi Human Rights Commission. While Mr. Badawi is not a Canadian citizen, Canada will continue to make its position known, both publicly and through diplomatic channels. Canada will also continue to call for clemency.

Canada has an active partnership and candid relationship with Saudi Arabia, and believes that Saudi Arabia can play a positive role in many of the region’s security challenges. Canada will maintain an ongoing, respectful dialogue with Saudi Arabia on a number of issues, including human rights.

Thank you for writing and sharing your concerns.

Raif Badawi has been sentenced to receive 1000 lashes for “insulting Islam”.  He received 50 lashes in public on Friday, January 9th during prayer time in Jeddah.  Mr. Badawi has not been flogged since January 9.  No reasons were given for the cancellation of the most recent flogging on March 27.  Raif Badawi remains at risk of flogging (and potentially execution for apostasy).

If you are in the Ottawa area, you can join CFI Ottawa and Amnesty International at the weekly protest every Thursday afternoon at the Saudi Embassy. 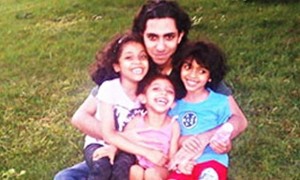