Here’s a copy of  a statement from the family of  Raif Badawi, currently in prison in Saudi Arabia:

We have received information from reliable sources that there are attempts within the Penal Court to retry Raif Badawi on apostasy charges again. Apostasy charge is punishable under Saudi law with the death penalty by beheading.

We also received confirmed information that the Supreme Court has referred Raif case to the same judge, who sentenced Raif with flogging and 10 years imprisonment.

This judge is biased against Raif. He has twice requested that Raif be charged with ‘apostasy’. His request was declined at the time on the ground that the penal court has no jurisdiction on cases that lead to death penalty. However, due to a new regulation issued by the Supreme Judicial Council on 19.09.2014, the Penal court has now jurisdiction over major cases, which are punishable by the death penalty, amputation and stoning.

We have reasons to believe without any doubts that the same judge has again asked the Head of the Court of Apeal to charge Raif with ‘Apostasy’.
It should be mentioned that this judge stated in his written verdict against Raif, that he has proof and is confident that Raif is an apostate.

We call on the world citizens and governments not to leave Raif dragged by such bigots to death. And we renew our calls to his Majesty King Salman to pardon Raif Badawi and allow him to leave Canada to be united with his family there.

I am happy to have been born in Canada where we have freedom of belief; my Jewish grandparents emigrated from Europe to escape religious persecution.  I believe that all people deserve the same rights to freedom of thought and expression. I would like to remind you of the terrible situation of Raif Badawi who is currently imprisoned by the government of Saudi Arabia, Canada’s ally and trading partner.  Mr Badawi has been tortured by flogging, and is now facing the death penalty for apostasy.  Mr Badawi’s wife and three young children are living in Canada as refugees.  In the spirit of Canada’s commitment to human rights for all, I ask the government of Canada to urge the Saudi government to release Raif to join his wife and children here.

And if you are in Ottawa, join members of CFI Ottawa and Amnesty International at our weekly protest every Thursday afternoon at the Saudi embassy. 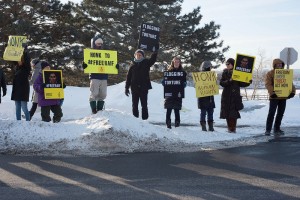