The second Chesterton Debate entitled “God’s Politics: A Debate on Religion’s Role in Public Life” lived up to its promise to “provide a forum for respectful and substantive discussion of contentious issues relevant in today’s world.”

Leslie Rosenblood, founding member and policy adviser for Canadian Secular Alliance, and Iain Benson, Catholic legal philosopher, writer, and professor, were evenly matched. It was a pleasure to listen to them deliver their arguments for and against the resolution: “One’s religious convictions should play a significant role in how they conduct themselves in political affairs.” Rosenblood and Benson appeared comfortable with each other and delivered their arguments with confidence and flair.

The moderator, Lorna Dueck, did not play an active role in the debate but stood between Rosenblood and Benson while her facial expressions alternated between amusement and bemusement. For some reason Dueck found Rosenblood’s statement, “statistically, atheists are significantly under-represented in prisons throughout North America” worth a glance toward Benson and a laugh: however, Benson did not react. 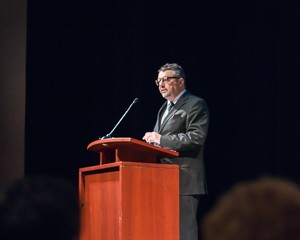 Benson began his opening arguments with the observation that the secularist attitude toward religious beliefs “are like hideous yellow spotted pajamas that no one should wear in public office but that could well be worn privately.”  Yes, Benson is correct: overt public displays of religion, especially clothing and jewellery that advertise a person’s religion, are similar to hideous yellow spotted pajamas and are offensive in the public sphere. 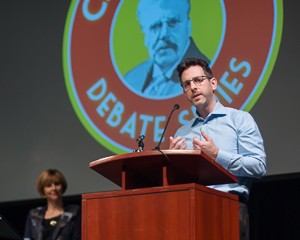 Rosenblood pointed out the differences between atheism and secularism. He made it very clear that atheism was not being debated (it was debated last year) and stressed the merits of secularism in the public and legal sphere, a position that gets support from both religious and non-religious members of society.

Benson, who is an admirer of G. K. Chesterton, quoted one of Chesterton’s aphorisms

All roads lead to Rome which is why many people never get there.

Chesterton is wrong: no longer do all roads lead to Rome, and they certainly do not all lead to Roman Catholicism.

Benson is intelligent and well-educated, but his arguments are infected by his partiality for religion as the basis for moral and ethical behaviour. Rosenblood discounted Beson’s claim that “secular is just a code [word] for confusion,” by arguing that “declining political influence of religious institutions is not a bad thing.” Secularism is neutral because it does not favour the tenets of any of the copious number of religions or give any religion’s beliefs and restrictions supremacy in government or legal institutions.

Despite the excellent arguments from both sides of the resolution, I doubt that many were convinced to change their position for or against the question: should one’s religious convictions play a significant role in how they conduct themselves in political affairs? However, it was a pleasure to be among the audience during the first half of the second Chesterton debate (I left at intermission). The debate provided “a substantive discussion of contentious issues relevant in today’s world.” Rosenblood and Benson presented well-prepared arguments and treated each other and the audience with consideration and respect.