Conrad Black’s latest National Post article, “The Shabby, Shallow World of The Militant Atheist,” is recommended reading for its ability to show how far a high profile convert to Catholicism will go to undermine atheism.

Richard Dawkins, one of the “prominent militant atheists” Black is attacking in his article, calls our attention to Blacks’s latest diatribe:

Conrad Black seems to be at large again. Spot the factual errors, illogicalities and failures to understand.

The National Post (unwittingly?) provides the best rebuttal to Black and his argument by including this photo with the article: 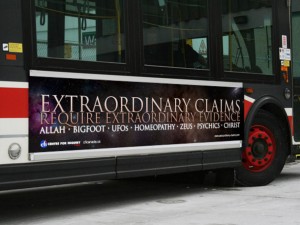 Note the emphasis on Christianity and the absence of all the other too-numerous world religions.

without some notion of a divine intelligence and its influence on the culture of the world through the various religions . . .  there would be no serious ethical conceptions.

would lead to the charge of ad hominem, it is fair to say that Black’s attack on militant atheists like Richard Dawkins, Peter Singer and “the inevitable Hitchens” is motivated by his conversion to Catholicism:

it was the spiritual bait that I sought, that converted me from atheism, that I premeditatedly swallowed, and that prompted me to agitate the line and be reeled in by the Fisher of Souls.

Blacks opening paragraph begins with an appeal to authority, the authority of Dr. John Lennox, Professor of Mathematics at the University of Oxford and Christian apologist:

Having spent a very enjoyable two hours in conversation with Dr. John Lennox, professor of mathematics at Oxford University and one of the most rational and persuasive advocates of a Christian theistic view of the world, it has come back to me what a shabby level of mockery and sophistical evasion many of the militant atheists are reduced to, in comparison even with the famous skeptics of earlier times. People like Bernard Shaw, Bertrand Russell and Sigmund Freud, wrote and spoke well, and were more able than is rigorously admissible now to cloak themselves in the inexorable march of science and reason. Their witty if gratuitous disparagements of Christianity were much more effective than the coarse blunderbuss of my late quasi-friendly and frequent adversary, Christopher Hitchens.

Read “The Shabby, Shallow World of The Militant Atheist,” and take Richard Dawkins suggestion: look for “the factual errors, illogicalities and failures to understand” in Black’s article.