Somebody recently pointed me to this “comprehensive and in-depth new public opinion poll” on religion in Canada conducted by the Angus Reid Institute: 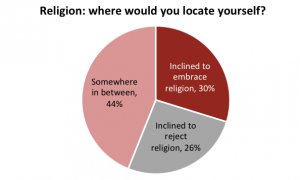 I have read all the study carefully, and I have to reject its results based on the selection bias and conceptual ambiguity.

This is a huge selection bias. How did they go from this select group to “Religion and Faith in Canada”? A randomized phone survey would have had more statistical power.

For example, how many 55+ year old first generation immigrants are members of this forum, and how many of them responded to the survey? How many fundamentalist/conservative religious people do you think are on this forum and also took the survey?

There are also multiple conceptual problems or problems with the questions posed. Just a few examples 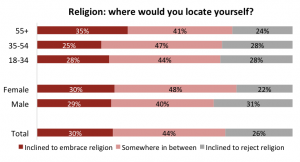 What is interesting about this study is our reaction to it – the results are already familiar to us. We consider the numbers close to what we knew about religion/irreligion in Canada from previous polls and the last Census of Canada. We can go straight to assuming that the study is well done, and that we can cogently comment on the results. The numbers can be intelligently discussed, as if they are right, just because they sound right, but that does not make the numbers right, unfortunately. Not for the whole of Canada.

How did the science of public opinion survey and statistics become so weak, subjective and muddy?

Will anybody in the Canadian public at large be aware of the shortcomings of this poll? And does the public even care about such details anymore?

Maybe we should do another Angus Reid forum poll to find out. That’s what Angus Reid would do!