A few weeks ago, Christopher Hassall and Ian Bushfield published “Increasing Diversity in Emerging Non-religious Communities” – perhaps the first peer-reviewed study of diversity within the atheist community. By looking at the speakers at 48 atheist and skeptic conferences between 2003 and 2014 and noting the proportion of speakers that were male and white compared to all other genders and ethnicities, they were able to produce a very rough measure of diversity in atheist “leadership”. Their results were interesting, and encouraging, and are discussed in detail in my previous post on the study, but as always I couldn’t help but ask: how did Canada do?

There are two ways you can approach that question. How diverse is the Canadian part of the “atheist leadership”? And: How diverse are Canadian atheist conferences? Let’s look at the conferences first.

Out of the 48 conferences in Hassall/Bushfield study, 5 were Canadian:

These weren’t huge conferences. Eschaton was the biggest, and the only one to exceed – barely – the average number of speakers at the time it was held: 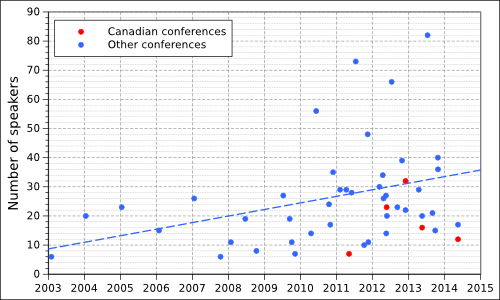 Number of speakers at atheist conferences.

First the bad news: when it comes to gender equality, the Canadian conferences were… underwhelming: 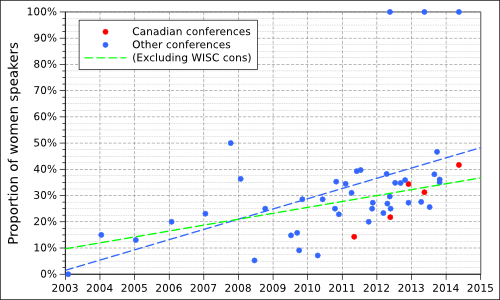 There are two trend lines on that chart, because one of them includes the three Women in Secularism conferences. The thing with those conferences is that all the speakers were women by design… which is fine, but it means they’re not really representative of what conference speaker diversity looks like when speakers are chosen “naturally” (that is, by whomever the conference organizers think will draw the biggest crowd, or get the most media attention, etc., without specifically selecting by gender). Because they skew the results so badly, I did the calculations with and without them.

However, their improvement over time is impressive. The four Imagine No Religion conferences form almost a straight line with a strong positive gradient – if Imagine No Religion 5 continued the trend, it would have just over 50% women speakers. I don’t think that will happen, though – looks like only 5 out of 13 (~38%) speakers will be women, which is not bad, but still a bit of a regression. To be fair, though, it’s not easy for small conferences like INR to field a really diverse speaker set.

There is better news when it comes to ethnic diversity: 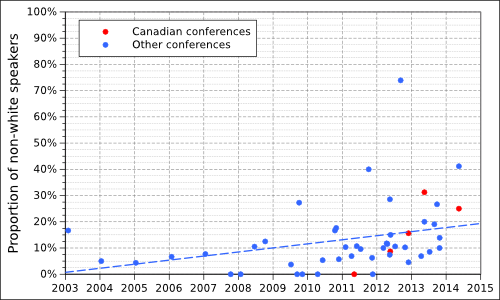 Once again, there is a strong trend toward improvement in the five Canadian conferences, but more than half of them meet or exceed the trend, and they do so quite significantly. Even better news is that it looks like the trend will continue – it looks like the proportion of non-white speakers at INR5 will be ~23%, which is not bad at all; just about on par with overall Canadian demographics.

So although Canadian conferences tend on the small side, they’re doing quite well at least with regards to fielding non-white speakers. They’re doing less well when it comes to fielding women speakers, but they are trending toward improvement.

What about Canadian speakers?

Well, unfortunately, there’s bad news there. Out of the 630 conference speakers in the study, 46 were Canadian. 65% of them were white males. 28% were white women, and 6.5% were non-white men. There were no non-white women among Canadian speakers: 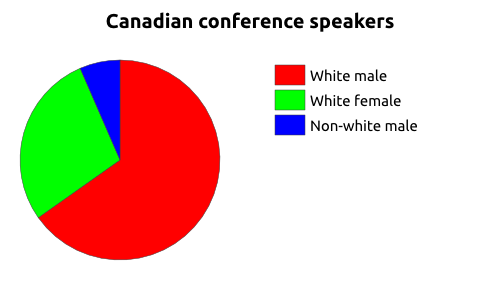 One last thing I want to point out is that Canadian conferences are vital to the atheist movement in Canada. We need more of them, and bigger ones. This is why: 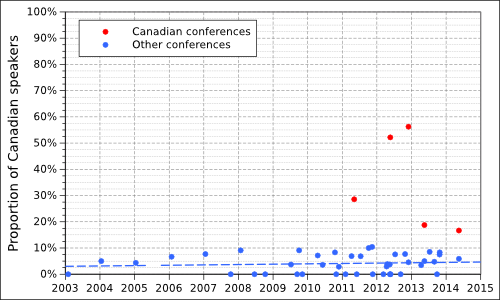 So in summary: Canadian atheist and skeptic conferences aren’t doing that great a job fielding women speakers, but they’re doing a pretty good job fielding non-white speakers, and there is a positive trend toward improvement. Canadian speakers, however, are not very diverse at all – we are in dire need of more diversity in Canadian atheist leadership. Broadly speaking, the conclusion for Canada is the same as the overall conclusion from the Hassall/Bushfield paper: There’s still a ways to go, but we really are making progress.