“Blog 051: Charlie, Copenhagen, the Niqab & that Odious Francis” by David Rand and posted on the Atheist Freethinkers website, is recommended reading. Rand is saddened and outraged by the killing of two people in Copenhagen on the 14th and 15th of February 2015:

all available evidence indicates that we are dealing with yet another Islamist act of terror, all too similar to the massacres which occurred in January in Paris at the offices of the magazine Charlie Hebdo and in a Jewish grocery store. In fact, the first of the Copenhagen shootings took place at a public event “Art, Blasphemy and Freedom of Expression” organized in honour of the victims of the massacres in France, and the second at the city’s Great Synagogue.

gave rise to a massive international movement in solidarity with the targets of the attacks, in particular the cartoonists of Charlie Hebdo.

Rand is pleased to note

The threat to freedom of the press, freedom of expression and especially freedom of conscience which these attacks represent was widely discussed and denounced. . . .

However, Rand is critical of those who did not denounce these attacks with unequivocal censure and highlights the comments made by the “Odious Francis” (aka Jorge Mario Bergoglio) the leader of the Roman Catholic Church:

Pope Francis Ist, despite his assiduous habit of cultivating an image of being an open-minded reformer in order, apparently, to mitigate the loss of influence and clientele which his Church has suffered in recent decades, expressed the opinion that: “One cannot provoke, one cannot insult other people’s faith, one cannot make fun of faith.”

Rand contradicts the pope (who deserves a stronger comeuppance than contradiction) and outlines “[t]he appropriate action to take, in the wake of the tragic events of Paris and Copenhagen”and says

The appropriate action to take, in the wake of the tragic events of Paris and Copenhagen . . . we must instead eliminate formally and definitively the legal aberration which is responsible for the creation of the pseudo-crime of “blasphemy” . . . we must work for the repeal everywhere, in every country of the world, of each and every law which criminalizes the free expression of religious opinions. An excellent starting point would of course be article 296 of the Criminal Code of Canada, entitled “Blasphemous Libel.”

and goes on to say “it is important that the Charlie Hebdo cartoons be disseminated as widely as possible”: 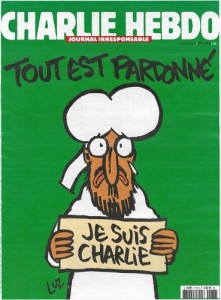 As well, Rand applauds the Conservative government’s intention to appeal the Federal Court of Canada decision

in favour of a Muslim woman who wears the niqab and who opposed the rule requiring the removal of any face-covering during the swearing-in ceremonies for new Canadian citizens.

Many people who call themselves secularists, especially those who have passed their opinion on a discussion forum (where I lurk but cannot comment) on this topic, are not  “unanimous in their support for a ban on any clothing which would hide the face during citizenship ceremonies.” However, as Rand points out

Anyone who would allow a candidate for citizenship to cover her or his face while taking the oath of citizenship cannot be a secularist; rather, they would probably be multiculturalist.

In “Blog 051: Charlie, Copenhagen, the Niqab & that Odious Francis,” Rand presents a compelling and persuasive argument against those who encourage “self-censorship out of ‘respect’ for beliefs which deserve none” and against those so-called secularists who think the niqab is suitable attire for a woman taking the oath of Canadian citizenship.

2 thoughts on ““Charlie, Copenhagen, the Niqab & that Odious Francis””