Today Google Canada celebrates the 50th anniversary of the national flag of Canada with a red and white Doodle:

Canada’s flag is described in an earlier Canadian Atheist post as “snow white and blood red.” While there was no blood shed, the Toronto Star tells us “Canada’s maple leaf flag [was] born amid bitter debate”: 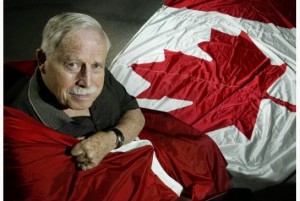 Whether paraded by a victorious Olympian, stitched on the backpack of a traveller, attached to the robotic arm of a space shuttle or draped over the casket of a soldier, the striking, red maple leaf Canadian flag is so prevalent, so generally revered, it seems impossible that its creation 50 years ago was fraught with controversy.

Debate in and out of Parliament got so ugly that the Toronto Star, in a series of articles by Peter C. Newman, dubbed it “The Great Flag Farce.”

While few of us would wrap ourselves in Canada’s flag, it is a familiar and uncontested sight 50 years later. In the days leading up to the flag’s 50th anniversary, Katie Daubs, from the Toronto Star, took “a look at Library and Archives collection of flag submissions from the early 1960s to see what they say about Canada.” My favourite is the submission below from a man from Quebec City, who wrote: 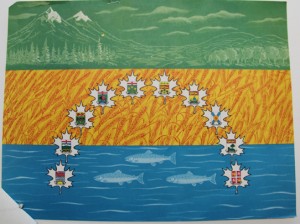 “Another good reason why Canada should have a true Canadian flag is that the British flag forever reminds the French Canadians as a conquered people, and that is why there is a separatist movement in the province of Quebec. A true Canadian flag would create initiative in Canadians in all walks of life for a better Canada and for a more harmonious attitude between French, English and ethnic groups in Canada,”

On Friday, Katie Daubs featured what “might be [her]  favourite batch.” This one is closest to the final design by George F.G. Stanley and adopted on February 15, 1965: 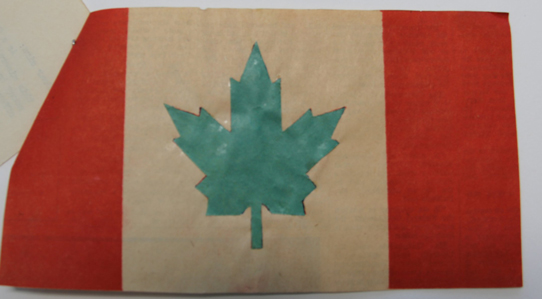 The man who submitted this design wrote,

“As a Canadian taxpayer I feel I have the right to send you my views on this miserable flag situation. I hope that the fact I am living in Quebec does not induce you to fling this note in the waste paper basket. I am not a crackpot isolationist nor an outraged Laval University student. I am a plain ordinary Canadian … So please gentlemen get off your $18000 per year rears, toss the politics out of your committee, and give us a flag that we can recognize anywhere and be proud of and who knows, maybe that will be the start to a future in which Canada will be a nation …”

The author of the post “Statutory Holidays in Canada” asks,

Why can’t the whole country simple [sic] agree on 9 or 10 common statutory holidays remains a mystery and a good indicator of just how overcomplicated our laws are.

Yes, he or she is correct, National Flag of Canada Day should be a national statutory holiday.  According the Speaker of the Senate at the Inauguration of the new flag in 1965,

“The flag is the symbol of the nation’s unity, for it, beyond any doubt, represents all the citizens of Canada without distinction of race, language, belief or opinion.”

In 2016, National Flag of Canada Day falls on Monday, February 15. It would be a perfect day for the whole country to have a day off as a symbol of the nation’s unity!