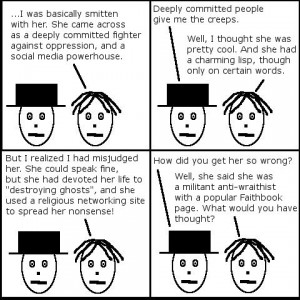 There really is, it turns out, a Christian networking site called Faithbook. It appears to be a project of the Fellowship of World Christians (FOWC), whose Statement of Faith assures us of their confidence that their “spiritual unity as believers in Christ is accomplished by His finished work on the cross”. I’m frankly not sure how to parse that, but I’ll consider using “finishing up some work” as a cheery euphemism for “getting crucified” from now on. Why the FOWC not?

5 thoughts on “Black Hat And Scraggly Hair: How Did You Get Her So Wrong?”