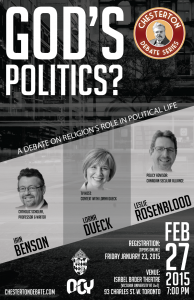 The second Chesterton Debate is entitled “God’s Politics? A Debate on Religion’s Role in Political Life.” The series website’s “About” section maintains

The Chesterton Debate Series, inspired by the notable English luminary G.K. Chesterton, is an initiative of the Office of Catholic Youth in partnership with the Archdiocese of Toronto. The debate series has two primary goals.

1.  To provide a forum for respectful and substantive discussion of contentious issues relevant in today’s world.

2.  To provide perspective on issues considered important to the formation of an individual’s conscience.

If the first Chesterton debate is any example, the second debate will fail in its goal to provide a forum for “respectful” discussion.

Luminary appears to be a favourite adjective for the organizers. G.K. Chesterton is described as a “notable English luminary,” and Iain Benson and Leslie Rosenblood are described as “two luminaries squaring off on one of the most controversial and important topics of our time.” Lorna Dueck, who is described as “a popular television personality and Globe and Mail contributor,” is the moderator.

Benson is “a Catholic legal philosopher, writer, and professor” and Dueck is “the host and executive producer of Context with Lorna Dueck” produced by Catholic TV, so don’t expect her to be impartial.

Rosenblood, founding member of and policy adviser for the Canadian Secular Alliance, hopes “you will be able to join [him] in Toronto on February 27” to hear him argue against the resolution: “One’s religious convictions should play a significant role in political affairs.”

Don’t let the Catholics/Christians control the message. Purchase tickets early to make sure there is an atheist and secular presence in the Isabel Bader Theatre.