Canadian Atheist writers Veronica Abbass and Diana MacPherson have been on a bit of a poetry kick in a recent post. Their poet of choice is the English poet William Blake (1757–1827), but their exchange inspired me to give due props to one of the greatest Canadian poets: E. J. Pratt (1882–1964). 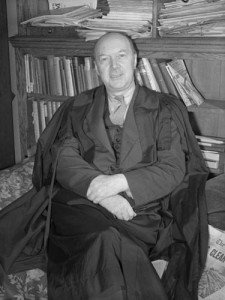 Pratt’s poetry is hard to pigeonhole. He was somewhat experimental, so he doesn’t really fit into any of the traditional schools, but at the same time there aren’t really any who have quite managed to follow in his footsteps, so he can’t really be called the father of his own school of poetry either.

He was born and raised in Newfoundland, so you probably won’t be surprised to hear that his poetry has plenty of maritime imagery. He spent most of his adult life in and around Toronto, starting out as a lecturer of psychology at U of T before switching to the English department, where he served as a professor.

He won three Governor General’s Awards for poetry: in 1937 for The Fable of the Goats and other Poems, a collection whose title poem is based on a fable by French poet Jean de La Fontaine; in 1940 for Brébeuf and his Brethren, an epic poem about the Jesuit missionary Jean de Brébeuf, who lived among the Huron learning their language and culture from 1625 until his death in a 1647 Iroquois raid; and in 1952, for Towards the Last Spike, an epic poem about the construction of the transcontinental Canadian Pacific Railway.

Aside from maritime imagery, one of the strongest influences on Pratt’s poetry would seem to be the chaos in the world during his life. He lived through both World Wars, and one of the most tumultuous periods in human history, and it’s reflected in his poetry. In fact, Pratt was critical of contemporary poets who ignored the troubles of the times. For Pratt, humanity’s violence was just another example of the struggles that exist throughout nature.

Pratt should be of particular interest to Canadian atheists. He wasn’t an atheist himself – in fact, he was a Methodist minister until he joined the U of T faculty of English. However, some of his poems are surprisingly critical of Christianity, and have a strong skeptical, scientific, and atheist streak. I haven’t read “The Prayer-Medley”, but I’ve heard it is quite mocking of Christian morality. His masterwork, “The Truant”, features a somewhat dense god hauling humanity before him to condemn them for screwing up his creation, only to have the man snap back at him:

And the little genus homo, six feet high,
Standing erect, countered with this reply—
‘You dumb insouciant invertebrate,
You rule a lower than a feudal state—
A realm of flunkey decimals that run,
Return; return and run; again return,
Each group around its little sun,
And every sun a satellite.
There they go by day and night,
Nothing to do but run and burn,
Taking turn and turn about,
Light—year in and light—year out,
Dancing, dancing in quadrillions,
Never leaving their pavilions.

‘Your astronomical conceit
Of bulk and power is anserine.
Your ignorance so thick,
You did not know your own arithmetic.
We flung the graphs about your flying feet;
We measured your diameter—
Merely a line
Of zeros prefaced by an integer.
Before we came
You had no name.
You did not know direction or your pace;
We taught you all you ever knew
Of motion, time and space.
We healed you of your vertigo
And put you in our kindergarten show,
Perambulated you through prisms, drew
Your mileage through the Milky Way,
Lassoed your comets when they ran astray,
Yoked Leo, Taurus, and your team of Bears
To pull our kiddy cars of inverse squares.’

… holy shit. Reading that makes me feel that I should take back what I said about him not being atheist! And the poem goes on, with the man making such declarations as: “’Twas we who pinned upon your seraphim their wings, and when your brassy heavens rang with joy that morning while the planets sang their choruses of archangelic lore, ’twas we who ordered the notes upon their score out of our winds and strings.” The closing lines are:

‘We who have met
With stubborn calm the dawn’s hot fusillades;
Who have seen the forehead sweat
Under the tug of pulleys on the joints,
Under the liquidating tally
Of the cat—and—truncheon bastinades;
Who have taught our souls to rally
To mountain horns and the sea’s rockets
When the needle ran demented through the points;
We who have learned to clench
Our fists and raise our lightless sockets
To morning skies after the midnight raids,
Yet cocked our ears to bugles on the barricades,
And in cathedral rubble found a way to quench
A dying thirst within a Galilean valley —
No! by the Rood, we will not join your ballet.’

… again, holy shit. The last words are basically, “we will not dance for you, God; we’ve learned to get by without you”.

Another theme of interest that the scientifically minded will find in Pratt’s work is strong inspiration drawn from evolution. I mentioned above that Pratt saw the conflicts of his time as merely another aspect of the struggles that exist throughout nature – in fact, he saw them as part of the evolutionary struggle. Pratt uses lots of evolutionary imagery, particularly linked with imagery of the sea, throughout his poems.

As of the 1st of January, all of E. J. Pratt’s works are now in the public domain in Canada. That means we can now freely reprint his poems, as I’ve done above, or create derivative works based on them.

But the above comes with a warning. Right now, Canada is in talks to implement the Trans-Pacific Partnership. Most of those talks have been in secret, but whistleblowers have leaked some of the agreement clauses. As it stands, the TPP would require that Canada extend its copyright term from “life+50 years” to “life+70 years”. If that were implemented, Pratt’s poetry would remain under copyright until 2035, rather than becoming public domain this year. So, too, would be the writings of Ian Fleming (creator of James Bond) and the music of Sam Cooke (such as the song “Chain Gang”). (For a list of other artists whose works entered the public domain this year, but would have been delayed until 2035 under TPP‘s restrictions, see here.)

Unless we can convince our government to insist on refusing to agree to that unnecessarily long copyright term, we will face a period where – for 20 years – not a single work will enter the Canadian public domain unless the copyright holder graciously allows it to. This chokehold on creativity will not benefit artists that have been dead for half a century, and it will not benefit contemporary artists who could take inspiration from their works and build on them. It will only benefit those who want to suck on the teat of those dead artists and selfishly deny the rest of Canada the freedom to share and extend our culture.

I recommend sending a message to your MP that you want copyright to protect artists, not those who want to profit off them almost a century after their death. Say no to copyright term extensions; give your vote to the party that will keep the culture free.

I’ll close by reprinting one of E. J. Pratt’s short poems – an act which would be illegal until 2035 if Canada signs the TPP as it is:

It took the sea an hour one night,
An hour of storm to place
The sculpture of these granite seams
Upon a woman’s face.