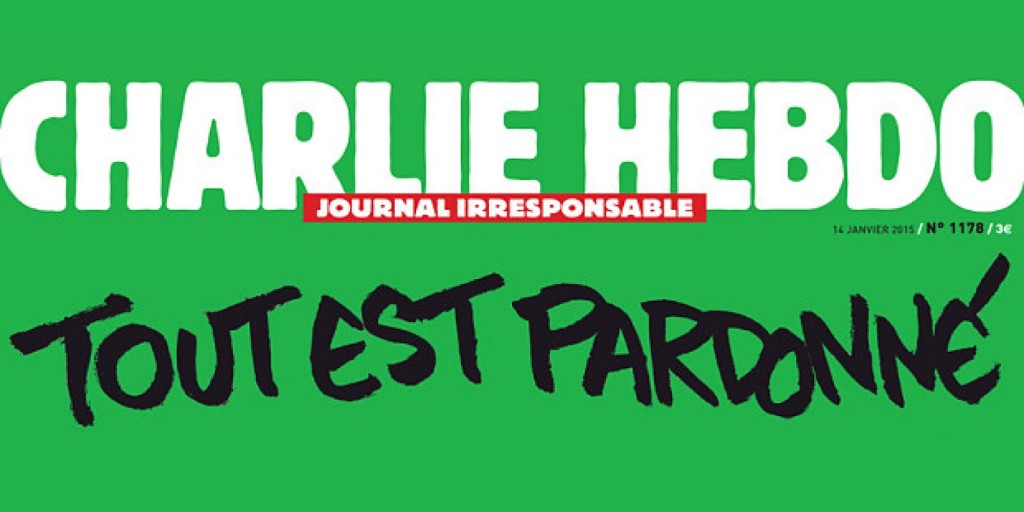 Nicolas Chinardet from Pink Sauce: Life with a Pink Seasoning has “produced a rough and ready English translation” of the editorial published by Charlie Hebdo in its January 14, 2015 issue published after the terror attacks: “Will there still be ‘yes, buts’?”

For the past week, Charlie, an atheist newspaper, has performed more miracles than all the saints and prophets combined. What we are most proud of is that you have in your hands the paper we have always made in the company of those who have always made it. What made us laugh the most is that the bells of Notre Dame have rung in our honor … For the past week, Charlie worldwide has moved much more than mountains. For the past week, as Willem has so beautifully drawn it, Charlie has lots of new friends. Anonymous people and global celebrities, the humble and the well-off, the disbelievers and the clerics, the sincere and the Jesuits, some we will keep for life and some here only briefly. Today we take them all, we do not have the time or the heart to sort them out. But we are not fooled either. We thank with all our heart those, in millions, whether private citizens or embodying institutions, who are really on our side, who, sincerely and deeply, “are Charlie”. They know who they are. And fuck off to the others, who, in any case, don’t give a shit…

The editorial ends with messages for

The millions of anonymous people, all the institutions, all the heads of state and government, all the political, intellectual and media personalities, all the clerics who this week proclaimed “Je suis Charlie” need to know that it means also “Je suis pour la laïcité/I am for secularism.” We are convinced that for the majority of our supporters, this goes without saying. The others can fuck off.

with a special message at the end for one person:

One more thing, an important one. We would also like to send a message to Pope Francis, who “est Charlie” also, this week: we only welcome the bells of Notre Dame ringing in our honor when it is members of Femen who make them resound.

You can read the whole translation of the editorial at Pink Sauce. When you get to the end, use the comment section to thank Nicolas Chinardet for his translation and for his pictures, taken in Trafalgar Square on January 7 and 11.