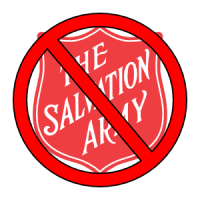 Don’t donate to the Salvation Army

Stop giving money to The Salvation Army. Seriously, stop it. They are not a charity, they are a church. They are an evangelical Christian church. This is not opinion, this is fact. And it is no great secret, they even say so plainly and clearly right on their site.

Every year I repeat this plea, not out of mere habit but because every single year they do something fucking horrible. Usually several things. (At this point I would link to my many previous articles documenting the shenanigans of The Salvation Army, but due to a series of circumstances – such as this blog’s history being erased in January – all of my old articles are now gone. Bummer, but Google will give you plenty of examples if you’re interested.)

This year’s (first) horror story comes from Tennessee. The Lejeune family – Tim, his wife, their daughter (16), and two sons: 15 year-old Dustin and a 5 year-old – is going through some hard times. They’ve been living out of the car, sleeping in it parked in WalMart parking lots. But when a cold snap hit and nighttime temperatures were approaching −10 °C, they needed a place to stay. So they went to the Johnson City Salvation Army, who took the desperate family in so they wouldn’t freeze to death in their car.

Nah, I’m just fucking with you. They turned them away of course.

Of course if you’re as familiar with I am with The Salvation Army’s bullshit, at this point you’re probably shrugging and saying, “Meh, so what? That just means it’s a day that ends in ‘y’.” Stories of people being turned away by The Salvation Army are hardly news. At most, you’re probably morbidly curious what the reason was this time. Were they gay? Muslim? Atheist?

Nope, the crime this time was being between the ages of 12 and 16, and male.

No, really. And this wasn’t just some random officer making a decision on his own that isn’t official policy (that’s The Salvation Army’s favourite excuse for explaining away shenanigans that make the news). This is apparently a longtime policy of theirs.

According to their “logic”, a boy who is 12–16 can’t be put in the women’s side – because then he would see all those scandalous pyjamas. (Like, seriously? Do these people even know what a 12 year-old boy can see on the Internet any time he wants? Or is it the women they’re trying to protect here?) But he also can’t be put in the men’s side… because of gay paedophiles.

No, seriously. Gay paedophiles. That’s literally their excuse. Apparently, they’re like… everywhere. Lurking at Salvation Army shelters, for some reason.

And note – the boy was accompanied by his father. (Or, alternately his mother, if they chose to put him on the woman’s side, I suppose. The point is, he was accompanied.) Didn’t matter. They threw the entire fucking family back out onto the street on the coldest night of the year.

Yes, that actually is how it ended. They literally did throw the entire family back out into the freezing night rather than let Dustin stay accompanied by his father.

Luckily police came across the family, and when they heard the story, the police actually went to The Salvation Army to plead with them to take the family in.

So the police took the family to an inn, and the officers tried to pay for them to stay the night out of their own pockets. When the inn clerk realized what was going on, the room was offered for free. And as if that wasn’t enough, the cops took that extra cash and, along with the help of their comrades and some 911 dispatch operators, got the family some groceries, some food, and some gas.

See that, Sally Ann? That’s what charity looks like.

Oh, but the story doesn’t end there.

The Salvation Army is – unsurprisingly – unrepentant about what happened, though they are reviewing their policies. They did quickly make some gestures to stave off the negative publicity – they gave the family a tank of gas. They also let them stay the shelter a few nights – so they managed to sort out that policy problem after all, right?

Well, no. The reason the family was allowed to stay was because Dustin was no longer with them. After the whole mess went down, the kid had a breakdown, believing that it was his fault the family was homeless and couldn’t even stay at a Salvation Army shelter. He had to be checked into a local hospital to get mental help.

I hope none of this comes as any surprise to any readers here. The Salvation Army has a long and storied history of horrible shit. Whether it’s throwing people out onto the street for being gay or the wrong religion, taking charitable donations and using them to finance lobbying for bigotry and discrimination, burning books and destroying donated toys because they’re “un-Christian”, shutting down an entire city’s support services so they don’t have to work with gay people or non-Christians, doing their part for racism by “civilizing” the “savage” aboriginals of Canada in residential schools, or – hell – just living up to their founder’s vision of fighting the “three A’s” (alcoholism, atheism, and anarchy), The Salvation Army has proven time and time again that whatever good they might do, they’re not worth keeping around anymore.

There are plenty of good charities who will not only do more with your money, they will do it better and they won’t discriminate or act like sanctimonious assholes while they’re at it. This season, give the bell-ringing assholes a pass. Give your spare change to a charity, not a church. Do real good.

16 thoughts on “The Salvation Army throws family out into freezing night, due to fear of imaginary gay paedophiles”