The defining feature of the atheist movement over the last two or three years may be its focus on issues of diversity, privilege, and social equality within the movement itself. The discussion hasn’t always been pretty; indeed, even mentioning the issues will often draw eye rolls or outright ire. Thus far, most of the discussion has been based on anecdotal evidence, personal experiences, and casual observation. A newly-published, peer-reviewed study hopes to change that.

The study – Increasing Diversity in Emerging Non-religious Communities, by Christopher Hassall of the University of Leeds and Ian Bushfield, formerly of British Columbia, who now blogs at Terahertz Atheist – looks at the speakers at 48 atheist conferences over 11 years, a total of 630 speakers. Conference speakers represent the nearest thing the atheist movement has to leadership – they are the people that atheists specifically, via atheist organizations, choose to hear from. And because of that platform, their voices influence the atheist community as a whole.

Hassall and Bushfield use that set of conference speakers to see if the “atheist leadership” is representative of the atheist community at large. They also look into whether the disproportionate dominance of white male speakers continues to exist, or whether women and people of non-white ethnicities are getting better representation.

You may ask why these questions matter. Dr. Hassall explains:

In a blog post about the article, Bushfield explains why trying to quantify the diversity problem is so important:

There’s been a dearth of evidence in the discussions about diversity in the atheist community. Most focuses either on personal anecdotes or specific events/people and their actions or commentary. These discussions are clearly important – personal stories tell us that sexual harassment has happened at atheist and skeptic conferences and those making sexist comments should be challenged. But to make our efforts to change things – particularly at the systematic level – we need to mirror the successes of the evidence-based medicine movement (and by extension the more recent science-based medicine movement). This should seem obvious to a community that prides itself on using reason and evidence to guide its worldview, yet such a discussion has been slow to come.

(Both authors graciously answered questions about the study in an email exchange, from which several of the quotes in this post are taken. The full exchange is available on my private blog.)

The journal they published in, Secularism and Nonreligion, started up two years ago, and is the world’s first journal dedicated to the exploration of secularism and nonreligion. It is a true, double-blind, peer-reviewed journal, but – happily – is open-access, which means Hassall and Bushfield’s data, methodology, and results are available for anyone to read over.

The results of the first question – whether the “atheist leadership” is representative of the wider community – should not come as a surprise:

However, the second question – whether there has been an improvement over time – has a much more interesting answer. 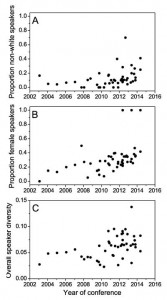 Diversity of speakers at atheist conferences over time

The charts on the right are from the study (they are “Figure 2”), and you can quite clearly see the trend of increasing diversity over time. The study shows that the trend is statistically significant, both when considering diversity as a whole, and when considering gender and ethnicity separately (as shown on the charts). The trend even held when the three Women in Secularism conferences (which feature only female speakers) were removed from the data set. It even held generally for individual conference organizers.

In other words, the paper’s findings can be summed up as: there is a very real diversity problem with the atheist leadership, but we are getting better.

The discussion has been predictably polarised, as seems to be the way of the atheist community. I think that these kinds of differences of opinion (“deep rifts” in PZ Myers’ words) and the public forum within which they have been explored have been intellectually positive in the sense that a lot of people who have never thought about these topics have been exposed to new ideas. I know I have learned (and am learning) a lot from the ongoing debate.

Both authors are optimistic, and both believe that objective data will only help advance the discussion. Dr. Hassall continues:

The main problem with the debate is that there have been no objective data on which to base arguments and, as a result, the discussion has become unwieldy in breadth and depth. I hope that our data can provide a stimulus to crystallise the debate that has gone on so far, and a platform from which to restart a more productive discussion.

Bushfield goes even further, already looking ahead to future studies:

… I think most of the discussion has been dominated by a small number of vocal commentators. It would be valuable to get a picture of what most “out” atheists think – my suspicion (based on data showing atheists are generally more progressive) is they would be broadly supportive of (at least limited) efforts to promote greater diversity.

The authors conclude the study by suggesting a number of measures that could aid in further increasing diversity in the atheist movement, and the atheist leadership in particular. More and better gathering of diversity data, and interventions taken based primarily on what that data says, is important. Also important is diversifying the stable of “gatekeepers” – both conference speakers and organizers – and allowing them more control in setting the agenda is also suggested as a potentially effective strategy.

Both authors take pains to stress that this study is merely the tip of the iceberg, and only represents a very limited view of the issue. As Bushfield wryly comments:

I fully recognise the irony of a sociological paper being published by a PhD in Biology and a MSc in Physics. I also realise that this is a discussion about diversity coming from two white men.

Our article largely deals with “are you a white man or not?” which provides a very blunt measure of diversity. Clearly wrapped up in the “non-white” (a problematic term as it defines people by what they are not, I know, but hopefully readers understand why we use it despite its flaws) are a broad range of ethnicities, and we chose (for similar reasons) to adopt a binary gender variable despite the fact that there are openly trans speakers at some of the conferences. We have not even touched on the issues of ableness, sex, gender, or sexual orientation.

I would agree with both of those observations. There is a pressing need for more research into the population demographics of the atheist movement – indeed, into the atheist movement in general. It is surprising, and a bit disappointing, that virtually nothing has been done before, and that it took a biologist and an engineer to get the ball rolling. Surely as a movement that prides itself on being evidence-based would enthusiastically welcome more evidence about its own nature – or even demand it. I join the authors in hoping that this study leads to more work in the field, and that the findings become instrumental in drafting practical policies.

But I am very pleased with what we have already learned. For historical reasons, our movement began as a very small group of highly privileged people. But it has grown, and it now encompasses sizable chunks of the global population. It hasn’t always been easy, and we’re certainly not where we want to be yet. But the evidence shows we’re on the right track. I think that’s something to be happy about.

23 thoughts on “Study on diversity in the atheist movement shows we have a ways to go, but are making progress”