This depiction of one of Canada’s greatest advocates for women was illustrated by guest artist, Kate Beaton who has been known to explore the lives of other historical figures in her collection, Hark! A Vagrant.

I think that when it comes to notable people in the women’s rights movement in Canadian history, there are names we know like Nellie McClung or Emily White. They are the token examples in the high school history text; the answer to a multiple choice question somewhere. Maybe we know “The Famous Five” and what they did with the Person’s Case, but I doubt many of us can list the individual women themselves. I believe Henrietta Muir Edwards is one of the women who deserves a wider recognition for her work. Montreal-born–a transplant to the Prairies later in life–she fought for women’s rights, women’s education, women’s work and women’s health, across the country and from a very young age. She was a writer, an artist, a lawmaker and a teacher. She allied herself with likeminded activists and founded a number of movements and societies to improve the lives of women. Henrietta was a woman who made things happen and fought for it all with unflappable conviction. Canada is a richer country for having her as a citizen.

and provides an alternate draft illustration 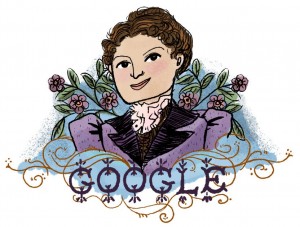 So famous, in fact, that she’s part of the so-called Famous Five: a group of Alberta women who fought for women to be declared persons under Canadian law. Their battle started in 1916 and culminated on Oct. 18, 1929, when Britain’s Privy Council officially declared Canadian women to be persons under the law.