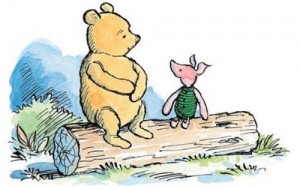 Councillors in Tuszyn, Poland have insulted Winnie the Pooh. According to the CBC,

The tubby little cubby, based on an actual bear named after Winnipeg, was suggested at a meeting of the council in Tuszyn, a small town in central Poland, to be the face of a new public playground, according to media reports in the United Kingdom.

That prompted anger from some councillors, who called Pooh “inappropriate.”

“The problem with that bear is it doesn’t have a complete wardrobe,” said Coun. Ryszard Cichy.

“Winnipeg is a tolerant and accepting community, and I hope that Winnie continues to teach children about kindness and friendship for years to come.”

The CBC asks for your vote:

What do you think of the fuss surrounding Winnie the Pooh being pants-less?

“Seriously? He’s a bear!” is winning.