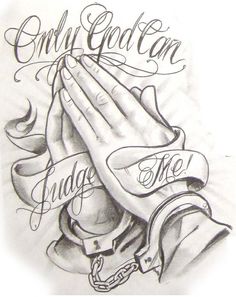 This past Saturday evening (Nov 8), the Humanists, Atheists and Agnostics of Manitoba (HAAM) invited Police Chief Devon Clunis to speak with them. Chief Clunis gave a talk called, Creating a Culture of Safety and followed up with a Q&A session. It’s great that Clunis engaged HAAM and kudos to him for taking the time to speak to them! The reason HAAM was interested in speaking with Winnipeg’s police chief is he is unapologetically Christian in his beliefs and those beliefs have crossed over into his professional life. In 2012, Chief Clunis made national headlines when he spoke about prayer as part of policing:

I think if we have a community that’s consistently praying for one another, hopefully we’ll now see the physical reduction of crime and violence in our city.

Further, it came to HAAM’s attention that Christian Bibles were regularly given out to new recruits and that religious materials from other faiths were not offered. After one member of HAAM asked him how a new recruit might feel if they did not want to accept a Bible, while the majority of their class members did, according to The Winnipeg Free Press, Clunis responded:

That’s a good point…acknowledging the religious and ethnic diversity of the police service that provides diversity training to its officers.

However, while acknowledging the issue with handing out bibles, Clunis remained unapologetic about his prayer comments; according to The Winnipeg Free Press, Clunis rhetorically asked the group:

What would happen if we all just truly — I’m talking about all religious stripes here — started praying for the peace of this city and then actually started putting some action behind that?

I am surprised, in this day and age, that this still needs to be said, but Canada is a multi-cultural, secular society and religion should play no role in public service. Clunis needs to stifle his prayer talk when in the role of Police Chief and stop the insensitive practice of handing out bibles to new members of the police force.

However, Clunis has one other thing he must do immediately: change the materials the Winnipeg police force use to train their leaders because it is full of God references. The textbook is called, Developing the Leaders Around You: How to Help Others Reach Their Full Potential by John C Maxwell, an evangelical Christian and pastor with a Doctor of Ministry degree from Fuller Theological Seminary. Maxwell founded several organizations including EQUIP, whose vision is:

The above EQUIP mission is a red flag, but if Maxwell wrote a leadership book without any religious references, I would have no issue with the materials. However, I searched inside the book (see citation at the end of this post) for the word, “God”, using Google Books and found ten references (note that not all the pages are available as previews in Google Books so it there may be more). I have read a lot of leadership books and I do not recall coming across the word “God” once in any of them so this strikes me as somewhat unusual. According to The Winnipeg Free Press, HAMM found the following God reference the most troubling:

One page…. said an “assessment of Future Leaders should include an evaluation of these qualities” listing things such as “self-discipline”, “a good track record,” “the ability to solve problems,” “the person is free from anger” and “is willing to make changes.” The quality the Manitoba Humanists found unsettling was No. 16 on the list — “The person is growing closer to God.” (DM: the  reference is on p.41)

A disclaimer at the end of the section regarding point 16 says “Please consider the fact that the author has a Christian background and in his personal view a relationship with God translates into a belief that any person truly growing closer to God must first follow Bible-based values (which would include the majority of the other points on the list). This does not mean to say that individuals who are “Not” growing closer to God are void of the necessary ingredients to serve as leaders within the WPS.”

I agree with HAMM, this is very problematic. Even with the disclaimer, it’s unpleasant to be subjected to unnecessary Christian God talk in the work place. I found a chart in the book troubling as well; it appears under a heading titled, “Equipping Potential Leaders” and is on p. 86 of the book; the chart is introduced on p. 85 as “….potential leader characteristics  adapted from author and leadership consultant Bobb Biehl….” 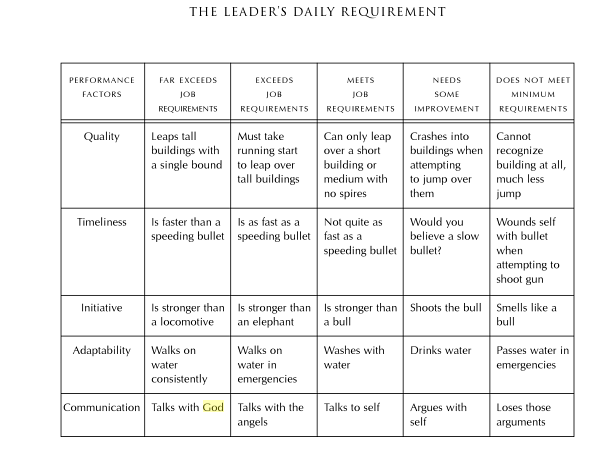 As you can see in the last column someone who “talks with God” is considered as “far exceeds job requirements” in Communication and someone who “talks with the angels” is considered “exceeds job requirements” in Communication. Even if this is tongue in cheek, which I’m sure it is given the other qualities like “as fast as speeding bullets”, is it really inclusive to add the God stuff as examples of employees who go above and beyond? I’m sure there are lots of religiously neutral examples that could go under the “Communication” category instead.

The book even asserts that God’s authority is the ultimate authority and disses secularists for not getting it:

Spirituality: In secular circles, people rarely consider the power of spiritual-based authority . It comes from the people’s individual experiences with God and from His power working through them . It is the highest form of authority. (p. 100)

Somehow I just don’t think this jives with secular work police officers do; are they expected to yield to God’s authority over our laws? Moreover, will they, as Bob Russell, a retired police officer and a member of HAAM worries, be overlooked for leadership roles if they are not Christian?

According to The Winnipeg Free Press, Clunis said a staff member brought him the training materials when there was no program for middle managers and that he adopted the materials because Maxwell is a “phenomenal leadership guru… not simply because he’s Christian.” I agree that it shouldn’t matter what Maxwell’s beliefs are if his leadership books are truly great, but it does matter when those beliefs seep into the materials, as they clearly do. What’s wrong with Stephen Covey‘s books? Covey was a Mormon yet his books appear God free and are considered the best leadership books out there. His family has continued his leadership training legacy so videos, books and training events are available for the choosing! It looks like the Chief either didn’t know the content of his training materials or didn’t care. Whatever the reason he needs to change them because they clash with the diversity training his officers receive.

Let’s hope HAAM keeps the pressure on Clunis to ensure Winnipeg police officers have a religiously neutral place to work and learn!

Maxwell, John C. Developing the Leaders Around You: How to Help Others Reach Their Full Potential. Nashville, TN: Thomas Nelson, 1995. Print.

8 thoughts on “God and the Winnipeg Police Force”