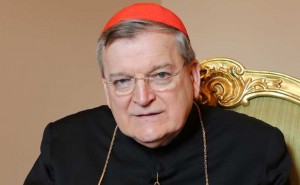 Cardinal Raymond Burke, one of the voices of the Catholic Church, gave an exclusive interview to reporters at LifeSiteNews in response to

a controversial presentation by an Australian couple before 191 of the Catholic Church’s leading bishops and cardinals at the ongoing Extraordinary Synod on the Family this week.

While “some Synod fathers responded to the short intervention by the couple ‘very warmly, with applause,’” Burke

called the Pirolas’ question a ‘delicate’ question that needs to be addressed in a “calm, serene, reasonable and faith-filled manner.”

“If homosexual relations are intrinsically disordered, which indeed they are — reason teaches us that and also our faith — then, what would it mean to grandchildren to have present at a family gathering a family member who is living [in] a disordered relationship with another person?” asked the cardinal.

Burke goes on to expose the hypocrisy of the Catholic Church by showing concern for children:

“we don’t want our children” to get the “impression” that sexual relationships outside God’s plan are alright, “by seeming to condone gravely sinful acts on the part of a family member.”

Burke lies when he says

“We wouldn’t, if it were another kind of relationship — something that was profoundly disordered and harmful — we wouldn’t expose our children to that relationship, to the direct experience of it. And neither should we do it in the context of a family member who not only suffers from same-sex attraction, but who has chosen to live out that attraction, to act upon it, committing acts which are always and everywhere wrong, evil.”

Burke is an evil and duplicitous voice of the Catholic Church, the Church that ignores and covers up “sexual relationships outside God’s plan,” the Church that showed, and continues to show, no concern for children.

2 thoughts on “The Bigoted Voice of the Catholic Church”