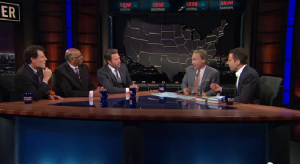 “It’s not people, it’s ideas.” Sam tries to say to Affleck who rudely talks over him over and over

For those of you who haven’t seen and/or read about Sam Harris’s dust up with Ben Affleck on Real Time with Bill Maher on Friday, October 3, you can view the exchange here.

Today, Sam Harris addressed his discussion (if you can all it that since Affleck rudely interrupted Sam every time he tried to clarify or make a point about his position) in a post on his site titled, Can Liberalism Be Saved From Itself? As soon as Sam announced the link on Twitter, his site slowed down so be patient, I’m sure many people are scouring it for “evidence” that Sam is a racist.

I personally found both Sam’s points/behaviour on Real Time and this response well argued and factually supported. Here is one of my favourite points that backs up Sam’s position:

After the show, Kristof, Affleck, Maher, and I continued our discussion. At one point, Kristof reiterated the claim that Maher and I had failed to acknowledge the existence of all the good Muslims who condemn ISIS, citing the popular hashtag #NotInOurName. In response, I said: “Yes, I agree that all condemnation of ISIS is good. But what do you think would happen if we had burned a copy of the Koran on tonight’s show? There would be riots in scores of countries. Embassies would fall. In response to our mistreating a book, millions of Muslims would take to the streets, and we would spend the rest of our lives fending off credible threats of murder. But when ISIS crucifies people, buries children alive, and rapes and tortures women by the thousands—all in the name of Islam—the response is a few small demonstrations in Europe and a hashtag.” I don’t think I’m being uncharitable when I say that neither Affleck nor Kristof had an intelligent response to this. Nor did they pretend to doubt the truth of what I said.

Do read the entire article.

via Can Liberalism Be Saved From Itself? : Sam Harris.