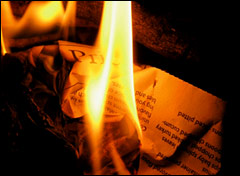 In an article in Pink News, National Secular Society President Terry Sanderson says exactly what I’ve been thinking: “Ignore the PR, the Catholic Church Continues with Its Grotesque Homophobia.”

Sanderson is furious with gay rights groups’ reaction to the Reuters report on the results of the Catholic Church’s Extraordinary Synod on the Family:

Its sheer delusion to think that this is anything but propaganda and flim-flam from an organisation trying to protect itself from the international battering it is getting over its grotesque homophobia. These gay rights groups who want to praise and congratulate the Vatican can include me out.

Sanderson is correct: do not be misled by Cardinal Raymond Burke’s demotion; the Catholic Church has a long history of burying problems rather than solving them. Burke’s bigoted attitude that “homosexual relations are intrinsically disordered” is the attitude of the Catholic Church, and the Extraordinary Synod on the Family is just another attempt to apply a thin coat of whitewash to fool the credulous and the hopeful.

and goes on to suggest

The patronising statement by the bishops at this self-important gathering at the Vatican should be carefully printed off by every gay person, they should then take it to their local Catholic church and there ceremonially burn it. We should tell the congregation loud and clear that we do not want the poisonous crumbs from their wobbling table of bigotry. Instead they should be begging our forgiveness for the centuries of torture and discrimination they have heaped upon us.

What a great suggestion!

As far as I’m concerned, they can shove their statement where the sun don’t shine.

because what else can I say about and to an organization that calls gays “these people”?