Is creation science so bad that a layman can refute it? Christian creationist apologist Andrew Snelling in his Answers in Genesis article “Radiohalos—Solving the Mystery of the Missing Bullets” makes a claim so ridiculous that anyone with a pinch of skepticism, an Internet connection and an IQ over 80 can refute it.

The age of the earth is the key; if the earth is 4.55 billion years old, the Bible is refuted. No Adam, no Eve, no tree with tainted fruit; it becomes another turtles all the way down myth. Andrew Snelling being a true believer rises to the defense of the Bible, railing against the 4.55 billion year old earth he attempts to use rapid radioactive decay during Noah’s flood to prove the earth is 6,000 years old.

Catastrophic geological events change the physical constants of the universe? Rocks crashing into each other on earth change physical constants? Can catastrophic geological events dramatically change the speed of light or the strength of the magnetic force? People actually sat and listened to this and did not pelt him with rotten vegetables? Tell me it is not so.

I do not know enough physics to try to guess what would happen to the universe if the forces that control radioactive decay were to change dramatically. Would there still be a universe as we know it? Maybe the universe would still be recognizable to us, but there are two other reasons that show how absurd Andrew Snelling’s hypothesis of “catastrophic rates of radioactive decay” is. I will use the time from the Cambrian until now, about 540 million years, for my calculations.

Every day we are exposed to radiation. Background radiation from radioactive decay is about 3mSv

(3 millisieverts) per year, and a fatal dose is about 8 sieverts. If the yearly dose were to be multiplied by 540 million during Noah’s flood, Noah and the animals would have glowed in the dark, but only for a very short time. Maybe the creationists have an out: a new interpretation of Genesis 6:14! 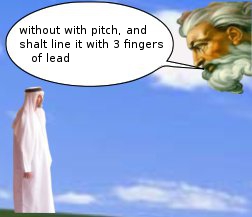 Oops, even that does not save Noah. Every day we ingest Potassium-40 and Carbon-14 from our food. We are irradiated by these elements from within our own bodies. 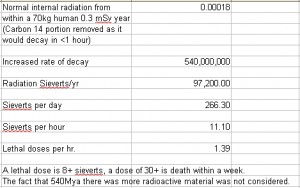 Radioactive decay gives off heat. How much? An amazing amount. An article in Physics World estimated that that up to 20TW or almost half of 44TW of heat flowing from the earth’s interior comes from radioactive decay. Multiply by 540 million and Noah would be enduring one hell of a heat wave. It’s time to reread our bibles: Genesis 6:15 revisited. 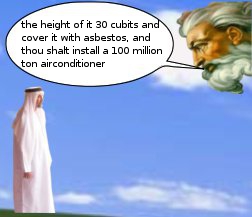 Nope, asbestos is not going to be up to the task! 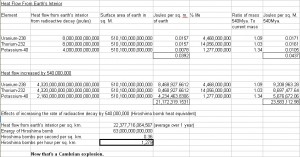 Noah and his animals would have been first steamed, then roasted, and finally, carbonized in a few seconds.

Religion can delude people into believing utter nonsense. How could any educated man stand in front of an audience and sprout such nonsense? Why wasn’t the audience rolling on the floor laughing and yelling “POE, POE.” The earth must be ancient or we would have been roasted. Any attempt to prove the earth is young by dramatically changing the physical constants like the speed of light or radioactive decay rate is doomed by the physical consequences of the change. Creationists need to put a catastrophic increase in the rate of radioactive decay in the creationist dustbin along with an increase in the speed of light before too many people injure themselves laughing.

It was 4400 years ago, so how do YOU know that increasing the decay rate 540 million times would create more heat and radiation, WERE YOU THERE?!! Using creationist, logic I could answer yes I was. I am big, moody and have a white beard-godly attributes; therefore, I am a god. WERE YOU THERE to say I wasn’t?

God siphoned off the heat for his hot tub. 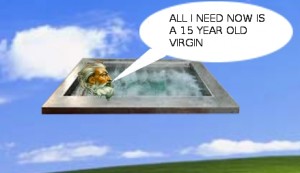 God used the radiation for his tanning bed. 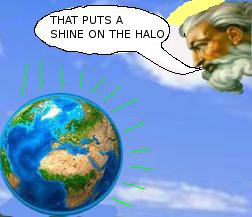 Would someone please check my math; the numbers seem so huge. If anyone has an idea what such a dramatic change in the radioactive decay rate would do to the universe, I would like to hear it.

One thought on “Answers in Absurdity: Putting the Crazy in Creation Science”