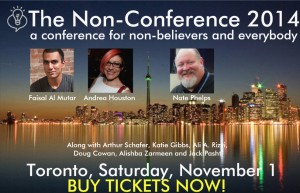 WHY A CONFERENCE FOR NONS:
In Seinfeld, Jerry sits across from George at the diner and inanity ensues. From this sidetracked conversation about salsa George has an epiphany. The show they will pitch to NBC will be this: a show about nothing.
Atheism is the ultimate show about nothing.
Every atheist is familiar with the canard “if you don’t believe in god you must believe in nothing.” On the contrary: atheists believe in most things that ‘believers’ believe in. But, sometimes we believe in things that our theist friends do not.
For example, I believe that doctors in Ontario should provide evidenced-based care for every one of their patients and not be allowed to pick and choose based on their personal religious beliefs.
I believe that hanging your hat on the British North America Act is a ludicrous justification for allowing religious-based discrimination of teachers and students at publicly-funded Catholic schools.
I believe that evidence is paramount, in the development of political policy, and that basing it on anything else is tantamount to playing Russian roulette.
I believe that we are free to inquire about and critique any idea or ideology, political or religious. Doing so is not disrespectful to people. On the contrary, it is absolutely essential to having a safe and prosperous society.
I believe that dying with dignity is living with dignity and that, often, what impedes compassion is religiously-based dictates.
I believe that nothing I have just asserted is controversial, though, to many, it may appear that way.
I believe that atheism matters.
Secularism matters.
Humanism matters.
I wanted a forum for these ideas, a public forum, because all of these things matter to the public, believer and non-believer alike. They matter to everyone.
This was the birth of The Non-Conference that will take place in Toronto on Saturday, November 1, 2014.
Details are available by clicking on this link: www.thenon-conference.com
If you are already sold and want to go directly to buy tickets click here: Eventbrite The Non-Conference.
Whatever your beliefs, you need to hear: Nate Phelps, Andrea Houston, Jack Pasht, Arthur Schafer, Katie Gibbs, Doug Cowan, Alishba Zarmeen, Faisal Al Mutar and Ali A. Rizvi speak.
Nate Phelps, left the Westboro Baptist Church on his 18th birthday. He has journeyed from Topeka, Kansas to Calgary, Alberta, from the most infamous church in North America to a spokesperson for atheism and LGBT rights. He has seen what faith can do.
Andrea Houston, is perhaps best known for breaking the 2011 story that Ontario Catholic schools prohibited students from forming gay-straight alliances (GSA) clubs. Catholic schools are still being obstinate in the face of the law.
Jack Pasht, is an entrenpeneur , lawyer, and board member with Dying with Dignity. Jack is privileged to work with an organization that is playing a crucial role in establishing a new and essential human right for future generations of Canadians: the right to die well.
Arthur Schafer, is a bioethicist and professor at the University of Manitoba. He is featured on CBC regularly for his expert take on ethical issues. He was recently interviewed regarding The College of Physicians and Surgeons of Ontario review of policies on physicians and the Human Rights Code.
Katie Gibbs, did what few of us dared to do: She took on the very real problem of erosion of science and evidenced-based policy decision-making and helped form an entire organization to confront it. The proactive Evidence For Democracy was the result.
Doug Cowan, is currently writing the book that could be the poster for this conference, Why Atheism Matters. Doug is a professor of Religious Studies at Renison University College at the University of Waterloo.
Alishba Zarmeen, is a young secular activist. Alishba, born and raised in Pakistan, is a photographer and socio-political analyst currently residing in Toronto. She was also the organizer of the first ever exclusive conference for ex-Muslim atheists with Richard Dawkins, among other prominent members of the atheist community.
Faisal Al Mutar, is an Iraqi born writer, public speaker, community manager, web designer and a social activist living currently in the United States. He is an advocate for freedom of thought, science, reason and the free market of ideas and economy. Al-Mutar is the founder of the Global Secular Humanist Movement.
Ali A. Rizvi, is a Toronto-based writer, physician and author of his upcoming book, The Atheist Muslim. His writings with Faisal Al Mutar and those confronting Islamophobia, have been picked up by the Richard Dawkins Foundation, and retweeted by Sam Harris and Tim Minchin.
They will be presenting their thoughts individually and discussing them as a group to an audience of 500 in the MacLeod Auditorium. A Q & A will follow the show.
Topics of the day will be:
WHY ATHEISM MATTERSHOW NOT TO DO ETHICSTHE HARM OF RELIGIONCATHOLIC PUBLIC SCHOOLSSCIENCE AND DEMOCRACYREASON AND THE TERRIBLE DEATHISLAM AND ISLAMOPHOBIA
Join the conversation.
Be a part of the change.
Come to the first annual The Non-Conference: a conference for non-believers, humanists, secularists and everybody.

One thought on “The Non-Conference: TORONTO 2014”