Today, I received my very own Russian commemorative stamp celebrating the soviet

space dogs Belka and Strelka. In the 1950s and 1960s, the Soviet Union sent many dogs into sub-orbital and orbital space to determine if space flight would be safe for humans. The first dog to go up was Laika in the spacecraft Sputnik 2. I feel bad about Laika because Sputnik 2 was not designed for a return journey to Earth, which meant that the humans that launched Laika into space intended for her to die. There was outrage at Laika’s death, however, and one of her trainer’s Oleg Gazenko, speaking at a Moscow news conference in 1998, admitted that:

The more time passes, the more I’m sorry about it. We shouldn’t have done it… We did not learn enough from this mission to justify the death of the dog. 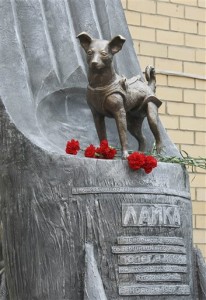 The poor mongrel from the streets of Moscow died of fright and overheating immediately after launch on November 3, 1957, even though the USSR had claimed that she had survived in orbit for four days (she had oxygen enough for ten days). Laika now has a monument in Star City, Russia which depicts her standing on top of a rocket (see image on left) and there is an idealized story book about Laika’s life.

Belka and Strelka’s story is more cheerful as these dogs made it home after spending a day in space aboard Sputnik 5 on August 19, 1960. Strelka even went on to have puppies and Krushchev even gave one, named Pushinka, to JFK’s daughter Caroline in 1961.

For more information about Soviet space dogs, check out A Ball, and a Monkey: 1957 – The Space Race Begins or Soviet Space Dogs.