I don’t have the artistic ability or the subtle wit to create the next Jesus and Mo, but I put together a silly little comic and I thought I’d share it here. 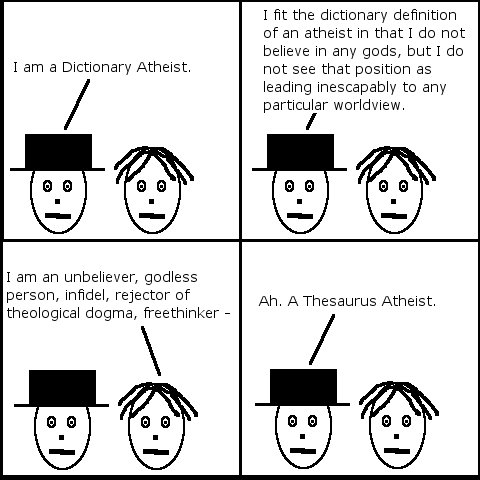 The term “Dictionary Atheist” was coined by PZ Myers to describe godless types whose conception of atheism is limited to the dictionary definition: a lack of belief in gods, with no positive claims or values attached or implied. Myers sees this attitude as shallow and unrealistic.

In that Montreal talk, I explained that there is more to my atheism than simple denial of one claim; it’s actually based on a scientific attitude that values evidence and reason, that rejects claims resting solely on authority, and that encourages deeper exploration of the world. My atheism is not solely a negative claim about gods, but is based on a whole set of positive values that I will emphasize when talking about atheism. That denial of god thing? It’s a consequence, not a cause.

However, Myers acknowledges that the values held by atheists vary widely – for example, some reject religion primarily because they dislike its social consequences, which differs from simply deciding on the basis of “evidence and reason” that we almost certainly live in a deity-free universe. Given that diversity, it surely makes sense to acknowledge that disbelief in gods is the only substantive position a roomful of avowed atheists will necessarily share. Dictionary atheism is a baseline that we all arrive at, and build upon, in our own specific ways.

This is the understanding of dictionary atheism that Black Hat, in my comic, is implicitly imparting when (s)he (I have no strong opinions about the sex of either character) suggests that atheism does not lead “inescapably to any particular worldview”. I imagine that most of the people Myers thinks of as dictionary atheists would say something similar – they may and probably do associate positive values with their own atheism, but refuse to assume that those values will be widely shared among atheists in general. Scraggly Hair, on the other hand, is probably the only person who has ever been branded a thesaurus atheist, and harbours no pretensions of speaking for anyone else.

3 thoughts on “Atheism By The Books”