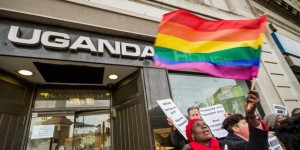 Today, people all over the world are celebrating the good news from Uganda:

A Ugandan court on Friday invalidated an anti-gay bill signed into law earlier this year, saying it was illegally passed and is therefore unconstitutional.

Sarah Jackson, Africa Deputy Regional Director at Amnesty International, echoes the thoughts of all the activists who protested against Uganda’s Anti-Homosexuality Act:

“Even though Uganda’s abominable Anti-Homosexuality Act was scrapped on the basis of a technicality, it is a significant victory for Ugandan activists who have campaigned against this law. Since it was first being floated in 2009, these activists have often put their safety on the line to ensure that Ugandan law upholds human rights principles.”