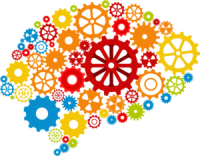 As a person who requires evidence to be convinced about the reality of things, I reject dualism:

the position that mental phenomena are, in some respects,non-physical, or that the mind and body are not identical. Thus, it encompasses a set of views about the relationship between mind and matter, and is contrasted with other positions, such as physicalism, in the mind–body problem.

I reject this notion because there is no supporting evidence that stands up to scientific scrutiny. Science tells us, we are our brains or as neuroscientist Christof Koch likes to put it, “no brain, never mind!”. The brain endows us with consciousness, gives us our personality, our predispositions, our cognitive abilities, our level of empathy and so on.

Though I consider dualists wrong (there is no ghost in the machine), I never saw them as dangerous. Until now.

The tragic suicide of beloved actor and comedian, Robin Williams shone a much needed bright light on the indiscriminate illness of depression. Depression is an illness where brain chemistry (monoamine chemicals serotonin, norepinephrine and dopamine) cause the sufferer to feel constant sadness (sometimes for no apparent reason), feelings of worthlessness, guilt, suicidal thoughts, among other physical symptoms such as sleeplessness or fatigue. Because scientists and doctors understand that the brain and mind are one, they also understand that the person cannot just “snap out of it” and often prescribe anti-depressent medication that helps correct brain chemistry by targeting monomine chemicals.

When I read this article titled, Robin Williams didn’t die from a disease, he died from his choice and especially this sentence:

No, we are more than our brains and bigger than our bodies. Depression is a mental affliction, yes, but also spiritual.

it hit me just how dangerous dualism can be. To the dualist, depression is something that can be conquered by using your spirit to overcome it. Your spirit just has to be powerful enough to overcome your brain. Imagine if doctors felt this way (and maybe some do)! Can you imagine the increase in suicides? No wonder, in our dualistic society, depression and other mental illnesses carry such stigma – in this view, it is the will of the sufferer that is to blame.

Thankfully, many theists (who believe in an afterlife, enjoyed or suffered by a soul or spirit) are inconsistent in their beliefs and reject these misguided notions, accepting the science (a cognitive disconnect that I’m sure requires coping mechanisms) and I really do hope that those same theists do not take these chastising words in the article to heart:

I can understand atheists who insist that depression must only be a disease of the brain, as they believe that our entire being is contained by, and comprised of, our physical bodies. But I don’t understand how theists, who acknowledge the existence of the soul, think they can draw some clear line of distinction between the body and the soul, and declare unequivocally that depression is rooted in one but not the other. This is a radically materialist view now shared by millions of spiritualist people.

I hope instead, atheists and theists a like read a more accurate article about what it feels like to want to kill yourself and start to move away from this dangerous dualist notion.

3 thoughts on “The Dangers of Dualism”