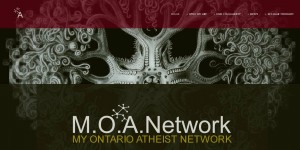 The idea behind My Ontario Atheist Network started a couple of years ago. I had just moved back to Toronto from Cyprus, and was looking to become active in my local atheist community. Finding atheists in Cyprus, a tiny country with approximately 98% religiosity, was fairly easy. If someone spoke out against theism, you heard about it. In fact, half the island heard about it, knew what town they were from and how much land their grandmother had.

In contrast, those with ‘no religion’ make up the second largest group in Canada, and approximately 3.9 million of these non-religious, identify as atheists, agnostics, or humanists. Finding these individuals, and organizations they lead, in a modern metropolis like Toronto, for example, should be easy. In reality it was not.

I found myself online, looking through atheist websites, skeptic magazines, and other social media. I was bombarded by Richard Dawkins, Ayaan Hirsi Ali and the like, advocating for and discussing skepticism and anti-theism in the U.S., U.K. and abroad. What I didn’t find was loud, proud Canadian atheists, speaking about Canadian issues. Maybe there wasn’t a strong need for this voice, or perhaps their voices were being muffled by our ever-growing, ever-roaring Southern neighbours.

There were the Canadian staples, such as Centre For Inquiry Canada, and the Humanist Association of Canada, but I soon discovered many more organizations, Facebook groups, meetups, blogs, and podcasts. The more I looked the more I found. It was exciting, and it also made me wonder: Did they know about each other? Why have I never heard of them, and what projects were they working on?

A conversation in the spring of 2013 with Spencer Lucas (then President of the Sudbury Humanist Association), brought these issues to the forefront. I discussed with him in detail my idea for a network that would solve some of the administrative and marketing issues of the community. It seemed evident that some groups did not know about each other. What was becoming more evident was that I wasn’t alone in my experience. During the Atheist Bus Campaign in Sudbury, a man from Timmins joined the Sudbury group. In conversation with this newcomer, Spencer mentioned the Timmins group and asked if the man was a member. He was stunned to find out such a group existed. This was a problem, and I intended to solve it.

I wanted to create a new system in the rationalist arena, and not just another group to be lost among the many. I wanted My Ontario Atheist Network to be a gateway -to ease someone new to the community – to the multitude of events, groups and resources available to those who identified as skeptic, humanist, or by no label at all.

Spencer, with a penchant for witty acronyms and the absurd, coined the name ‘M.O.A.N.’, and I loved it! I thought of an article that had recently come out about atheists having better sex and immediately laughed out loud! How fun! Some people love it and some people don’t. That’s okay. Some saw it as confirmation of the association that all atheists are moaning and whiny. That’s okay too. People remember the name, and that’s the purpose of a name – to be remembered. On the other hand, what we do with the network and how it positively affects Canadians, whatever the name, will be reflected by our actions, and that is our priority.

We’ve all heard of David Silverman, but do we know our local skeptic leaders, and their respective communities? We’ve read PZ Myers, but have we read the U of T biochemistry professor who writes about evolution on his blog, Sandwalk? We all know about the battle to teach creationism in U.S. schools, but do we know about the Catholic Church’s role in our public school system? Do we know about the One School System, which advocates for the amalgamation of the Catholic and Secular Boards? We need to learn about and promote our own personalities, and that’s what our Featured Freethought section is about. Every week we’ll feature various organizations fighting for evidence based policy and secularism in Canada. It’s also a place to showcase every day atheists and humanists, who are volunteering, or leading their local groups, stay-at-home mums, doctors, and piano teachers, who are just like everyone else, living, dying, and of course, paying taxes.

M.O.A.N. is non-partisan. There is no allegiance to one organization no matter how big or how small. Whether the mission is social or activist, whether it deals with Humanist issues or Pastafarian good humour, whether it’s atheist or skeptic, the M.O.A.Network will invite them equally. This is meant to be an inclusive and exhaustive resource for everyone in the non-religious community.

‘The whole is greater than the sum of its parts,’ is part of M.O.A.Network’s mission. Those fortunate enough to have been at the Reason Rally with 25,000 other atheists in March, 2012 know what can be accomplished when a dozen different groups, that may sometimes disagree, network for a common goal.

When it comes to freedom of expression, Canada fares well, relative to other countries. We could take comfort in this fact, as long as we remain vigilant that comfort can breed complacency. In recent years we’ve experienced how ideology, be it political or religious, can have degenerative effects on societal development, and so there is work to be done. We have our own unique issues, and when we cooperate to tackle these issues, we increase our chances of making this country even better. Join. Network, and share in the change you want.