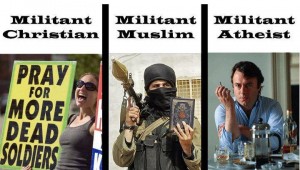 I’ve heard the claim, “atheists are just as intolerant as the theists they decry”, from theists and atheists alike.

Does anyone truly believe this despite the fact that the slightest applied skepticism and reflection is all that’s required to see through it?

Of course it’s easy to respond to this accusation of ‘intolerance’ with the old adage about militant Christians shooting doctors or militant Muslims blowing up buildings, compared to the militant atheists who merely write books, but when we dig a little deeper, there’s so much more everyday harm that believers inflict on each other – on those within their own faith communities – as well as atheists. Believers have had control for so long that it is difficult to separate their influence from what’s evolved into our current social norms. Religious belief has been woven into our social, cultural and political lives so seamlessly that it has become epistemological wallpaper – it’s there, but you don’t see it. And because of this, it’s not just believers who don’t see the privileged position their religion grants them; many atheists are blind to it as well.

Some of us do see it though. We see it with the clarity of cold justice. We see not just the coercive power of bombs and guns, but ‘blue laws’[1], restrictions on women’s rights, and atheist prejudice. We see the privileged position of believers undermining science and our attempts to protect our environment. And we see it with the backlash to our (CFI Sudbury) ad campaign in 2014. They regarded the simple message, “Don’t believe in God? You’re not alone”, as intolerance. One little sign, on the back of one bus, in one little city, in a liberal democracy became a controversy. It didn’t criticize faith and it wasn’t directed at religious people. It was a call to fellow freethinkers in a so-called pluralistic society, and yet people were offended – really, really offended. And it wasn’t just the theists – it was those who label themselves as non-religious as well!

I had breakfast with an Anglican Priest and theologian recently and there was a lot of talk from this lovely person about those atheists, as if they were aliens. I reminded him that most of these atheists were once believers, for all intents and purposes, yesterday. In this regard atheists are the same as theists because they were theists. The research is clear, about 80% of atheists once held religious beliefs. Many of them are still feeling the effects of leaving their various beliefs behind. They have lost family, friends, business clients, and sometimes whole communities. They have contemplated suicide and can be wracked with fear of hellfire years after they stopped believing in hell. As a life-long atheist it’s hard for me to understand this on an emotional level, and for that I’m thankful, but it makes outreach to those looking for support that much more important. These former believers can feel isolated. When in the company of their religious family, friends, and business clients, they tend to be deferential, respectful and pleasant, sometimes out of deference, respect and pleasantry, but oftentimes out of self-preservation. Even when they’re not afraid to express themselves, what they don’t do is strap a bomb to their chest, or make women have abortions at gunpoint, or tell people what they must or must not do with their bodies because there are no gods.

In this part of the world, just because you have left religion, it doesn’t mean that religion has left you. There’s a psychological need to belong and congregate. The ‘new’ atheist has just put themselves, for the first time, into an out-group through their pursuit of doubt. There are approximately 500,000 houses of god in the US (based on US stats). Reflect back on the number of Christian churches you pass each day to work and note that that number is likely an order of magnitude higher than the total number of atheist institutions in the entire United States of America. Needless to say, there are few places for freethinkers to congregate, so we make do by meeting at university lectures, conferences, pubs, and of course online. This is where we have found the freedom to express ourselves, often for the first time. So when the religious call us intolerant, and claim that we are ‘religious’ about atheism or ‘fundamentalist atheists’, we largely see this as ignorance and privilege, but when we hear these tropes from fellow atheists, it is confounding and toxic.

So to my religious friends, I ask you to take a step back and look at the world in which we live. You may have been looking through the lens of religious privilege.

To my atheist friends who wrongly accuse fellow atheists for being as intolerant as the religious people they decry, I suggest you understand that there are gradients of intolerance and that often what you have perceived as intolerant is actually rhetoric or just venting. There is truly a double standard in what we will tolerate from a believer compared to a non-believer. The atheist that charges his fellow atheist with intolerance must also note the danger in the accusation. They risk marginalizing an already marginalized group, in effect silencing those that have only recently found their voice.

Just talking about religion or being an atheist is more or less assumed to be wrong, almost inherently so. It’s part of the things we are not supposed to talk about. And why is that? Hitchhikers Guide to the Galaxy’s author, Douglas Adams put it best when he said, “Religion . . . has certain ideas at the heart of it which we call sacred or holy or whatever. What it means is, ‘Here is an idea or a notion that you’re not allowed to say anything bad about; you’re just not. Why not? – because you’re not!’”

Assumptions need to be addressed and critically analyzed before making claims of intolerance. 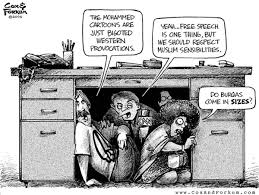 Drawing a cartoon is not as intolerant as a fatwa.

god Is Not Great by Christopher Hitchens is not as intolerant as the Bible by ‘god’.

And mocking is not as intolerant as the penalty of state sanctioned executions for apostasy.

[1] Laws prohibiting or restricting the sale of some or all commercial items on Sunday or other Sabbath day.

One thought on “Intolerant Atheists”