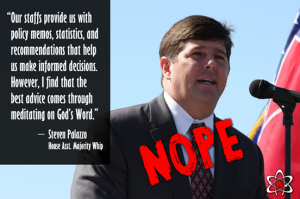 Jesus loves me—this I know,
For the Bible tells me so;

People actually sing this hymn and some people even believe the Bible is the best place to get advice on all kinds of topics. American Atheists would like you to know that Steven Palazzo, Republican and House Asst. Majority Whip, believes this:

“I find that the best advice comes through meditating on God’s Word,”

This statement is part of a letter, accompanied by a copy of the Holy Bible, Palazzo sent to every member of Congress,

“to help guide you in your decision-making,”

Prayer and the Bible are NOT replacements for actually knowing the facts. SHARE if you agree.

No kidding, I agree, which is why I’m sharing this with you.

However, let’s not get too complacent and think that something like this would never happen in Canada because it does. More than one municipal council in Canada opens council meetings with a prayer and one in particular asks for help from a

“Most merciful God, we yield Thee our humble and hearty thanks for Thy Fatherly care and preservation of us this day, and for the work which Thou has enabled us to perform.

We pray for Your Guidance and direction in our deliberations during this meeting, so that we may render a service to the Community that we are trying to serve. – Amen”

So, to borrow from American Atheists’ comment, prayer and the Bible are not acceptable from elected officials who should be competent enough to perform their job without asking for supernatural help. In fact, “Are you qualified to do your job and fill the position without publicly asking for help from God?” is a good question to ask municipal candidates before deciding to vote for them in the next municipal election in your area.