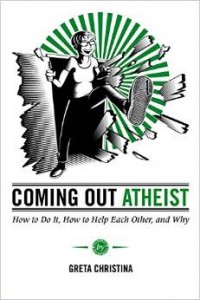 No, I’m not coming out as an atheist! It’s no secret that I and Canadian Atheist are atheists. However, Greta Christina, whose newest book is entitled Coming Out Atheist: How to Do It, How to Help Each Other, and Why, knows it is very difficult for some people to come out as an atheist:

In my research for “Coming Out Atheist,” I read numerous stories of atheists who had stayed religious for years — simply because everyone around them was religious, and they never considered the possibility that someone could be non-religious.

Coming out as an atheist is a powerful, liberating act. It makes life better for you, for other atheists, and for the world. But telling people you’re an atheist can be risky. What are the best ways to do it? And how can we help each other take this step? In this compassionate, friendly, down-to-earth how-to guide, author Greta Christina offers concrete strategies and guiding philosophies for coming out as an atheist. Based on hundreds of coming-out stories, the book offers a map of the territory atheists are likely to encounter and ideas on how to pick the path that’s best for you. This accessible, empathetic guide reflects a wide range of coming-out experiences. . . . For atheists who are on the fence, it offers guidance on making that decision—and gentle encouragement to take that step. Inspiring and realistic, kind and powerful, Coming Out Atheist is the much-needed guidebook atheists have been waiting for.

Should “atheists who are already out” read Coming Out Atheist? Yes, Christina’s book

gives practical ideas on how to help others join you in the sunlight.

What a great way to describe the place where atheists reside: in the sunlight!

One thought on “Coming Out Atheist”