This is the top portion of a Jehovah Witness pamphlet that appeared in my mailbox (apologies for the grease; I was eating french fries while reading it). I live in a rural area and even out here Jehovah Witnesses visit to try to recruit me and save my soul. This pamphlet is an invitation to one of their big summer conventions, which they have every year. When I was a student working in a park, they often camped there. The most amusing culture clash during one of their annual camp outs occurred between them and some Dead Heads who were camping to see the Grateful Dead play nearby.

This world government sounds a little Star Treky, but I somehow knew it was a Jehovah Witness pamphlet as soon as I read it and I don’t even know why. I so wanted to answer the rhetorical question that I almost wished for them to come 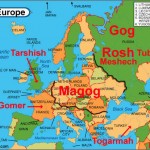 ask it of me in person (violating my never encourage Jehovah Witnesses rule) but because I couldn’t share it with them, I’m going to share my smartassness with you. My answer is….

Why? Well, he rules Gog and he has a dog named Buffy. I think the Gog thing would resonate with Jehovah Witnesses as they are a sect that seems to concentrate heavily on the end times. The Buffy part is just for me; I like Putin’s dogs and also I like Buffy the Vampire Slayer and the show’s content nicely complements Revelations and Gog.

But who am I kidding. Beyoncé tells us who runs the world!

I’ll be here all week folks. 🙂

2 thoughts on “Who Should Rule the World?”