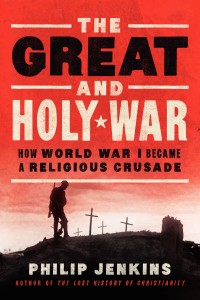 On May 1, Jenkins was interviewed on Interfaith Voices about his latest book The Great and Holy War: How World War I Became a Religious Crusade (2014):

World War One was soaked in religion. As the war dragged on, soldiers reported seeing angels, ghosts and figures of the Virgin Mary on the battlefield. Talk about the coming apocalypse exploded, and the enemies were transformed from political foes into evil forces, aligned with Satan. On this 100 year anniversary of the start of the war, historian Philip Jenkins explains why WWI was a kind of religious crusade, and says it sowed the seeds for future religious conflicts around the world.

The interview is available on Interfaith Voices Radio.