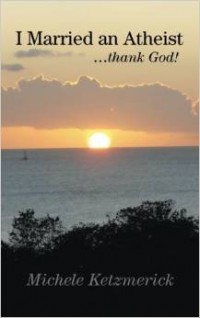 Canadian Michele Ketzmerick’s book, I Married an Atheist . . . Thank God!, has a catchy title and deals with a serious subject:

When Michele found herself facing the possibility of a life-threatening medical diagnosis, she suddenly realized that, for someone with a supposedly sturdy faith, she was terrified of death, of heaven, and of an uncertain afterlife. As she reveals how she began to question her faith and the tenets of her religion, Michele details how she unexpectedly learned more about peace, compassion, and morality from nonbelievers than she had during her entire life as a theist-and subsequently experienced the consequences of maneuvering in territory once forbidden for people of faith. I Married an Atheist-thank God shares the compelling story of one woman’s transition from long-held Catholicism to the courageous realization that it is okay to live a cherished, respectful, and loving life without religion.

The introduction and pages 1 to 27 of I Married An Atheist….thank God are available on Google books.