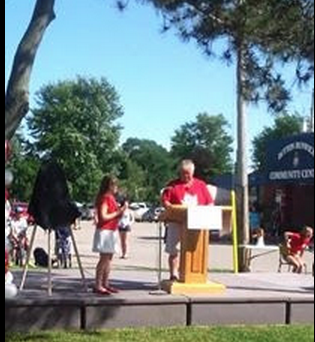 On July 1st, I wrote a quick note about how PM Harper asked God to keep our true north strong and free in a Canada Day tweet. I find the PM’s repeated invocations of a deity that at least 25% of Canadians do not recognize divisive in a country that recognizes multi-culturalism as a core value affirmed in the constitution and enshrined as an ideal in the Canadian Charter of Rights and Freedoms. So, when the leader of all the people of Canada invokes his god in a message to all Canadians on Canada Day, I am disappointed.

However, the PM wasn’t the only Canadian to exclude a large minority of fellow Canadians on Canada Day. Adults took offence when a 9 year old girl replaced “God” in O Canada with “please”. After 9 year old Selaena sang a beautiful rendition of O Canada at a Canada Day celebration in Dutton Ontario, her father, Austen, posted a video of her performance on Facebook and his timeline quickly filled up with glowing praise for his daughter’s talent. Here are some of the comments:

Awesome!! She has a gift! Keep encouraging her to use it ! It could turn into her career some day, she is that talented!

Check out Seleana’s rendition of O Canada for yourself. Her father explains Selaena’s reasoning to sing “please” as follows:

She wanted to be inclusive, given that her and a lot of her friends don’t even know what ‘god’ is. My children are secular and neutral – free to make up their own minds when they are old enough to do so.

First of all – good job raising your daughter, Austen! It is clear Selaena shows compassion and sensitivity beyond her years and it is refreshing to encounter kids unburdened by dogma.

Now to the ugly stuff. Selaena was scheduled to sing O Canada at the Cactus, Cattle and Cowboys Festival in Rodney on July 12 but because she replaced “god” with “please”, the people who run the festival pulled the plug. Selaena’s dad, Austen explains:

Apparently the committee has spoken and the people that run the Cactus, Cattle and Cowboys Festival in Rodney no longer want Selaena to sing the National Anthem on July 12th, because she replaced the word ‘god’ with ‘please’ – which was her choice. Thank you religion for being close-minded and bigoted towards those that don’t share your ignorance. Yes, I said that.

I just wanted to voice my opinion. I will NOT be attending the Cactus, Cattle and Cowboys Festival, after the decision to replace Selaena to sing the National Anthem on July 12th, because she replaced the word ‘god’ with ‘please’..

There were many supportive comments to this post and this gives me hope but let’s review some of the misguided arguments one responder put forth:

These arguments boil down to:

Comment 1&2: People who died in WWII and various other wars believed in God and they died for your freedom, so God should be in the anthem. I don’t know how the responder would know the personal beliefs of all servicemen and women in WWII and since we know there ARE atheists in foxholes, I’m sure there were atheists not only fighting for the allies in WWII but also the various conflicts Canada has been involved in. I suppose this responder has never heard of Gott mit Uns (God is with us), the motto emblazoned on SS belt buckles. If God was with the Nazis, well, with friends like those…..

Comment 4: There are more Christians in Canada than atheists so you should just put up with it. Now, there are more Christians than atheists in Canada, but just because there are more of one kind of person than another doesn’t mean that the majority person is more valid than the minority person. Moreover, we believe certain things not because most people believe them but because they are true. That’s how progress is made. That’s why we no longer accept the once majority belief that discrimination based on gender, race or sexual orientation is okay.

However, let’s understand this non-Christian minority. The “nones” are a BIG minority. According to the 2011 National Household Survey, 23.9% of Canadians do not identify with a religion. Further, the survey shows that 3.2% of Canadians identify as Muslim, 1.5% as Hindu, 1.4% as Sikh, 1.1% as Buddhist and 1.0% as Jewish. That’s well over a quarter of the Canadian population that is not Christian. Even if you subtract the Muslims and Jews who worship the same god as the Christians, that is still over 25% of non Yahweh believers in Canada. You can see how irreligion breaks down in Canada on this site.

I’ve spent a lot of time talking about the vitriol around Selaena’s version of O Canada but I want to end with thanking Selaena for her performance and for including all her fellow Canadians in her Canada Day celebration! Feel free to visit the Cactus, Cattle and Cowboys festival Facebook page and weigh in if you wish.