Why I Am An Atheist – by Michael Willems

Michael Willems (left; pictured here with Penn Gillette, right) is a Dutch-born, English-schooled engineer, traveller, and since several years ago, full-time photographer and educator. He shoots worldwide and teaches at Sheridan College and in his own school, http://learning.photography. 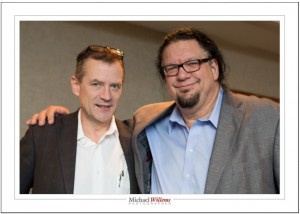 After working in 40 countries and living for a while in quite a few of them, he now lives in Oakville, Ontario, and wonders how he ended up living on a continent of believers.

You can see him at www.michaelwillems.ca.

But I will humour you. Why am I an atheist? I suppose there are several distinct reasons. One is that I grew up in a family (and to a lesser degree, a culture) where rationality, not irrational beliefs, were in charge. Just like an evangelical Christian is an evangelical Christian because his parents and culture, friends and family taught him to be just that. In my family and circle of friends, we laughed good-naturedly at what we saw as irrational medieval belief. Not that it was considered evil – it was considered naïve. I remember thinking as a small child that mommies had babies because God put them there. Similarly, I believed in Santa Claus. Both beliefs lasted until about perhaps age seven or eight.

That leads me to the second, and real, reason I am an atheist: I have a brain, and I was taught to use it. I remember attempting to have rational arguments with my grade school teacher, who said Jesus was everywhere. “Even behind the blackboard? Even where there are no people at all? In that bottle of mercury? In space? So how do we know that?” – it did not take long for the teacher to silence my uncomfortable questions. I was not impressed.

Since the ancient Greeks, and especially since the enlightenment, we have progressed enormously as a species because we have learned that statements of supposed fact need evidence to support them, or else they are meaningless. If you propose something, especially something unlikely, you must come up with reasons I should believe you. Factual reasons; not “because I say so” or “because your grandfather believed it too” or “because my entire church believes it”. And there are no good reasons to believe in a God. Zero. None. Religious philosophers have tried to come up with “proofs” since the ancient Greeks, but have failed to come up with anything close enough to be called evidence. Let alone proof. For a simple reason: there is no God, just like there is no Santa Claus.

When I say “There Is No God”, can I be absolutely certain? Of course not. Just as somewhere on the moon there may be olive groves, or the Prime Minister may indeed be spying into my bathroom somehow when I am taking a shower. And if you show me evidence of these assertions, I am delighted to change my mind (though perhaps less delighted to being spied on). But until you do, I am very confident in my lack of belief in these assertions. And that, by the way, is why atheism is not “a religion”, as some believers say. A religion, by definition, cannot be questioned, and may not have believers change their minds.

Let’s be clear about this: being an atheist means “not believing in a God”. Period. Nothing else. I have had many arguments with people who say “but how can you not believe in a God? If there is no God, there is no morality, and all we would have is rape and murder”. I call this the “wishful thinking” argument for the existence of god. This morality argument is an interesting argument, and I have good answers to it, and I love to engage in it: but it has nothing to do with my lack of belief in a god. Even if a god were necessary to impose Stalinist rules and avoid chaos, that simply means you would like there to be such a god – not that there is.

There is also an opposite argument among believer, namely that atheism cannot be allowed because it would lead to Darwinist, Stalinist, Hitleresque, slaughter. Believers who use this argument are as good as admitting that they do not actually believe, but that belief is ”better because of what would otherwise happen”. Again: apart from the fallacy of the arguments (Hitler and Stalin were both educated in the Church; Stalin was even going to be a priest), wanting there to be a god does not in any way mean that there is a God.

This “wanting” is the reason for so much remaining irrational belief. Chiropractic. Naturopathy. Magical pyramids that sharpen razor blades or cause cancer. Horoscopes. Homeopathy. 9-11 “truth”. All these are irrational beliefs, beliefs borne out of very understandable wishful thinking, and beliefs that stem out of a decoupling of what we learned since the Middle Ages: assertions need some evidence. I shake my head at these irrational beliefs: “really”?

There is also a reason I am vocal about being an atheist. It is not just that I think society would be a whole lot better off if it used rational logic and not snake oil. It would: no 9-11s, no religion- driven wars, no homeopathy taking advantage of the gullible. But it is also that I am personally affected by religion, in negative ways. Part of my tax money goes to religious organisations and schools. I cannot freely speak for fear of harm (there are still blasphemy laws, and even without those: try speaking about Islam freely, for instance). If I want to die at a time of my choosing, I cannot, and the church is the main force behind this prohibition. And so on: Canada’s ruling party is full of people who use God as the motivator for the laws they pass.

But none of that is why I am an atheist. I am an atheist simply because until someone shows me any evidence for a god, he is as likely as the olive groves on the moon. And I am astonished that in 2013, I even have to explain that.

2 thoughts on “Why I Am An Atheist”