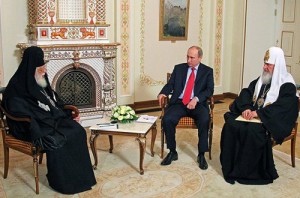 A couple of days ago, Lawrence Krauss tweeted that Russian authorities were attempting to shut down

his and Richard Dawkins’s movie, The Unbelievers in theatres throughout Russia.

This tweet came at an opportune time for me because lately I’ve been obsessively interested in Russia and Russian politics. Like the US, Russia seems to be a bit of an outlier when it comes to religion. As most of us already know, after the 1917 Bolshevik Revolution, the Soviet Union became officially atheist. The state rigorously enforced atheism by imprisoning priests and converting churches for other uses. Russians had no choice but to proclaim themselves atheists if they wanted to go to university or launch a successful career. However, after glasnost in the late 1980s and early 1990s, Russians started identifying as religious. According to research: 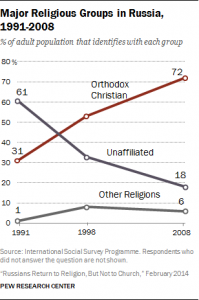 Between 1991 and 2008, the share of Russian adults identifying as Orthodox Christian rose from 31% to 72%, according to a new Pew Research Center analysis of three waves of data (1991, 1998 and 2008) from the International Social Survey Programme (ISSP) – a collaboration involving social scientists in about 50 countries. During the same period, the share of Russia’s population that does not identify with any religion dropped from 61% to 18%.

So, what does this uptick in religion mean? Does it reflect, as the Christian Monitor reports, that Russians kept their faith hidden during the soviet era, secretly passing it on to the younger generation? Vladimir Putin himself says that his mother had him secretly baptized, without his atheist father knowing. Or is Russian religiosity more closely related to Russian ethnic identity?

I may be a bit mind blind here, but I see this upsurge as a result of Russian nationalism, more than an expression of religious relief after oppression. The Pew survey also shows that Russians rarely go to the church they so closely claim to identify with as only 6% of youth regularly attend church while only 11% of the more religions 70+ crowd attend. 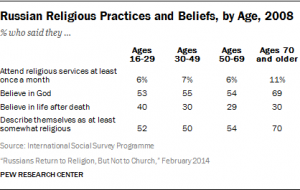 Now, this could just be a reflection of C&E  (Christmas and Easter) church goers. I’ve known many a C&E Catholic who still identify as Catholic. However, the survey results from SREDA lead me to think that Russians aren’t as religious as they claim to be. I’ve had to rely on the Wikipedia reference because I cannot read Russian and therefore cannot review the original. These data show the distribution of various religions among major ethnic groups in Russia with 46% of ethnic Russians identifying as Russian Orthodox (vs. 13% who identify as atheist and 27% who identify as non religious). Sure, these data may just reflect that ethnic Russians are religious but coupled with the response to the question: do you believe in life after death? a strange contrast emerges. Very few Russians, despite their religiosity, actually believe in life after death: 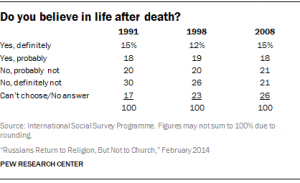 This result is in stark contrast to American Pew survey results where 74% of Americans believe in life after death. You’d think that if you believed in God and affiliated with a religion that promotes the belief in God that you’d totally buy into this concept of an afterlife.

Moreover, Russian descriptions of their level of religiosity is low with only 2%-3% seeing themselves as “extremely religious”. 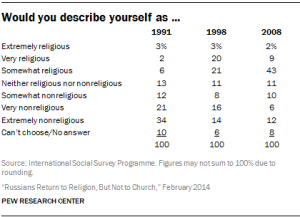 On top of all these survey results, there is the superficially paradoxical alliance between the Russian government and the Russian Orthodox Church. The Russian constitution guarantees separation of church and state and most Russians strongly support this separation. However, Vladimir Putin is so closely affiliated with the Church that Russians worry that the Church has too much influence in Russian politics as evidenced in this RT article that reports on a poll by The Russian Public Opinion Research Center (VCIOM):

Three quarters of Russians believe the Russian Orthodox Church should keep away from politics, while half of the citizens think the Church has some influence on the country’s internal affairs.

So, we have what, on the surface, appears to be contrasting data: many Russians identify as Russian Orthodox but rarely go to church, do not believe in life after death, do not think of themselves as “extremely religious” and strongly support separation of church and state to the point that the Church feels obliged to reassure Russians that there is no interference in politics. Could it be that Putin is like the majority of Russians and sees Russian Orthodoxy as an expression of Russian ethnic pride?

If the above is true, why all the fuss about The Unbelievers? I suspect the content of this movie is seen as Western and Vladimir Putin has often positioned Russia as something special (a position many Russians also hold) and distinct from Europe (which it really is). Therefore, it is simple: Europe is atheist therefore Russia is religious.

8 thoughts on “The Paradox of Russian Religiosity”