The Harper government commissioned a poll to name Canada’s greatest heroes and after 12000 people completed an online survey, Pierre Trudeau ended up at #1. Ouch, that must’ve stung a bit as Trudeau is no hero among conservatives; David Frum is particularly critical and sees Trudeau as someone who left Canada in debt & isolated from its allies. 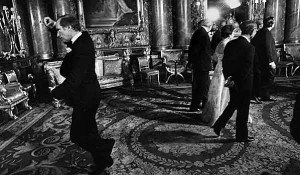 Pierre Trudeau being irreverent. I would’ve loved to see him interact with today’s world leaders

I grew up under Pierre Trudeau. He was in office just after I was born and stayed in office all the way up until I was in high school. In other words, I grew up in Trudeau’s Canada: the just society, where Trudeau invoked the war measures act (just watch me), abolished the death penalty, opened up French immersion schools, put French on all our cereal boxes, repatriated the constitution, pirouetted behind the Queen and pissed off the Americans (Nixon allegedly called him an “asshole” and the FBI surveilled him for decades, most likely twitchy over his friendship with Castro and his visits to Soviet Russia).

I relate a lot to Trudeau because his Canada was a big part of my generation. I even had a Trudeau coin that I brought to exams for good luck. However, I think what I liked about Trudeau the most was that he spoke honestly even if he knew the press wouldn’t like what he had to say; he seemed to actually govern because he cared about Canada not because he cared about governing. Take his statements on his religious beliefs as an example; while many Canadians avoided speaking about religion, Trudeau explicitly said that he was a Catholic who believed in God and life after death, yet he never forced this belief on Canadians and maintained a strong separation of church and state (you would never hear Trudeau proclaim, “God bless Canada”) and women gained access to safe abortions during his time in office.

You can read more on CBC but the top 10 are pretty respectable and say a lot about Canadian values; the survey also revealed that Canadians cherish medicare, peacekeeping and the 1982 Charter of Rights and Freedoms, all things Trudeau would have cherished as well.