It’s a running joke among those who know me that I apparently give off a vibe of being in dire need of salvation, because proselytizers are drawn to me like flies to candy. I have been approached – unsolicited – by people who wanted to share the Good News with me about Pentecostalism, Catholicism, Mormonism, Islam, Bahá’í, Buddhism, and Scientology (though, admittedly, the last one was in a grey area with whether it was really unsolicited or not), among others. And I’m not just talking about being approached at the usual places, like bus stops, or knocking on my door on a Sunday; one dude actually walked right in to a private hotel in Barbados, right past the security guards, right up to pool side and sat on the deck chair next to me to talk about Mormonism – completely unsolicited – with me sitting there with my shirt off and a shandy (beer & lemonade) in my hand, impressed enough by his stones to at least give him a listen. It happened so often I used to keep a stack of Awake! and The Watchtower magazines, in such perfect sequential order that you’d think I had a subscription (sadly not anymore; the elderly lady who used to be my pusher passed away several years ago).

So I’ve come to accept unsolicited proselytizing simply as a matter of course: I can spot ’em coming, I can brush them off politely – firmly if necessary, though it’s usually not – and, if I’ve got time, I can hear their pitch and even engage them in conversation if that’s what they want. But I’ve realized that not everyone is as comfortable with being preached at as I am, and that many are ill-prepared to deal with an aggressive evangelist. Luckily, relatively few are aggressive… but it turns out that even those who aren’t really aren’t all that honest.

In all the years I picked up my regular copy of Awake!/The Watchtower, I never really gave much thought to the packaging or presentation – it was just part of the subliminal background hum of my life, almost indistinguishable from the tinnitus. But just the other day my sister became part of the family tradition.

Unlike me, she is quite staunchly opposed to discussing religion – she is quite firmly atheist, as is the rest of my family, but she abhors discussing it. (It’s not fear – both her and my youngest brother still live mostly in Barbados, and if you think the US Bible Belt is intensely Christian… yikes. Both of them avoid religious debates simply because it avoids a lot of trouble there. Myself, my other brother and my dad, we all live mostly in Canada now, and we’re not afraid to trot the issue out.) At the whiff of anything religious, she’ll make an excuse and slip away. If she sees a proselytizer heading her way, she’ll go the other way.

Yet the other day, while waiting for a bus in Hamilton, she got approached by a woman handing out pamphlets. As she told it to me, she sensed the woman approaching had religion on her mind. But I suspect she lacked the wild-eyed look that a Barbadian would associate with proselytizers (believe me, Canadian street-preachers are sane, and normal-looking, compared to Barbadian ones), and this being Hamilton – home of both McMaster University and Mohawk College – it was not peculiar to have someone strolling around handing out pamphlets for some cause or another. So my sister let her guard down, and looked at the pamphlet being offered, to see if it was something she would accept.

This is what she saw on the cover of the pamphlet: 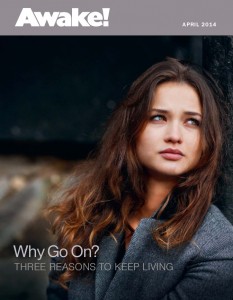 Now, I know – at a glance – what Awake! magazine is about, and who publishes it. And my sister is no fool; she knows all about The Watchtower, but we never got Awake! in Barbados (at least that I can ever recall – I actually remember thinking the JW magazines were much cooler here in Canada). (Don’t ask me how she managed to get April’s Awake! just last week. Maybe the Hamilton Witnesses are a little behind. Or maybe they were just dumping overstock.)

I defy you to look at anything on that cover and connect it to the Jehovah’s Witnesses, or to Christianity, or to proselytizing in general. And let me stress that according to the magazine itself, it’s purpose – as stated on the inside front cover – is that it is part of a worldwide Bible educational work. Is there anything on the cover related to that? More tellingly, is the lack of anything related to that suspicious? Well, yeah! The cover picture, really, has nothing to do with the title – it’s just a pretty generic attractive woman that someone probably thought could possibly pass as someone dealing with stress, maybe. She’s looking vaguely upward without it being too obviously one of those vacant skyward stares one associated with religious imagery. The background is blurred – is it a church? Who knows? And of the four stories inside the magazine, the only one mentioned is the most secular – not a peep about the interview with the alleged-atheist-scientist-turned-Christian who says “I Am Convinced That There Is a Creator”, or the one about the Bible’s viewpoint on racism. Indeed, other than some info buried in the inside cover table of contents with all the copyright stuff everyone always skims over, there’s no mention of religion at all until page 4. For a magazine whose sole and explicit purpose is worldwide Bible educational work… that’s a bit strange. It’s like a magazine whose cover is just a photo of a pensive businessperson and the title “Arouse!” with article teaser “What kind of things make your workday stressful?”, and the first few pages are some random facts about the oldest albatross and traffic in LA then – bammo – nudity on page 4, where it turns out that you’re reading a porn magazine, and the reason our friend the businessperson looked so pensive is because ze was trying to hide the twelve inch dong in zes ass from zes coworkers. Awake!’s presentation is not quite false advertising, but it’s damn close, and it’s certainly a lot less fun to discover the surprise than it would be for Arouse!.

My sister is no fool, of course. She’s smart enough to spot that there’s probably more to the story than the vagueness on the cover, so she peeked at the back too before accepting the magazine. This is what she saw there: 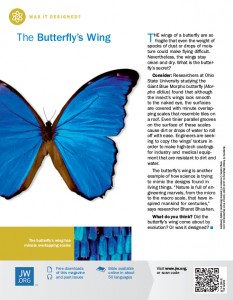 Now, readers of this blog will probably be quick to spot what’s going on here: it’s a creationist schtick. But for those who aren’t familiar with creationist bullshit and their keyword phrases (“Was it designed?”; the answer is: “no, jackass”) it would probably just seem a little loopy and faux-philosophical – like so many student-made pamphlets. The only hint of religiousness is the little comment on the bottom about the Bible being available in many languages… right between the note about free issue downloads and the QR code.

What caught my sister’s eye in those few short seconds she had in which to choose whether to accept the handout or not was the back page story, about the engineering structure of a butterfly’s wing. (She is studying architecture; engineering runs in my family.) That piqued her curiosity, so she took it.

As she commented to me later, it wasn’t until she opened the pages and found The Watchtower inside that she groaned: “Oh, no, they got me!” This is what the cover of The Watchtower, buried deep inside Awake!, looked like: 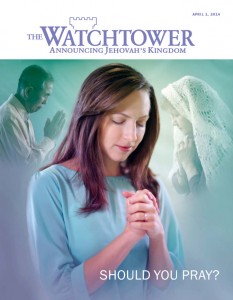 And the back cover: 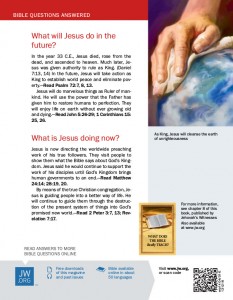 The Watchtower April 2014 back cover

(In case you were hanging in suspense about the JW answer to the “Should you pray?” question on the cover, their answer is: “Yes.” And as for “What will Jesus do in the future?”, turns out: “marvellous things”. What is he doing now? Apparently he’s in upper management overseeing the Jehovah’s Witnesses, which is to say he’s doing what most upper management does: jack all and taking all the credit while the Witnesses actually do all the work. Oh, and no need to worry about all that environmental devastation – Jesus’s big-ass washcloth will buff that right out.)

My sister took the hit good naturedly, with some self-deprecating at being caught off-guard. Some of the terms that were tossed around were “ninja Jesus” and “stealth Jesus”. She got a big chuckle out of the article “You Can Resist Temptation!” with testimonials like:

“I didn’t set out to look for pornography. But I got on the Internet and an ad popped up. Something snapped, and I just clicked it open.” — Cody

Don’t worry, “Cody”’s name was changed, possibly for his protection or something. Then there was “Dylan”:

“An attractive girl at work started flirting with me. One day she suggested that we go to a hotel to ‘play around.’ I knew exactly what she wanted.” — Dylan

“Dylan” apparently works at the same place as all those people who write letters to Penthouse, and where women apparently come on to straight-laced Jehovah’s Witnesses with lines like “let’s go to a hotel and play around”. (My sister seemed to strongly doubt that “Dylan” really had all that good a grasp on what “she” wanted, implying that “she” might have had some surprises in store for “Dylan” after all. I decided not to enquire further.)

So, she got a good chuckle out of it in the end. But I was left thinking.

I have a hard time believing it was ‘accidental’ that The Watchtower magazine – with its blatant religious displays – was hidden inside Awake! – with its curious lack of religion on the outside. That strongly implies intent to me, which would mean that Jehovah’s Witnesses are apparently aware that their message might be off-putting or unwelcome, and they think that it is okay to put on a false front to get past people’s defences. The ethical thinking behind that decision would fascinate me, as well as would hearing how the JW justify it with scripture.

But what do you – the readers – think? Is it ethical to hide your message to get in the door, then spring it on someone later? Is it a good strategy? Should atheists and skeptics use that kind of strategy?

And, if there’s anyone out there who is a former JW and knows how they decide to lay out their magazines or how they encourage their proselytizers to go about their business – or, really, anyone with similar experiences or knowledge about any religious group – do they actually do this deliberately? Is Awake! designed specifically for subterfuge – a false flag magazine that looks secular on the outside and slips religion in on the inside? Are those doing the handouts specifically told to make sure they hide all signs of religiosity when they’re going about their business?

And what would this mean for how these religious groups see themselves? Wouldn’t it imply that they’re a little, you know, embarrassed about themselves and their beliefs? If so, would that be because of their built-in persecution complex, or is it actually because they are a little embarrassed?

13 thoughts on “Do Jehovah’s Witnesses think their religion is embarassing?”