Update: Unbelievers is available for pre-order in the Canadian iTunes store now.

The Unbelievers, a documentary that follows Richard Dawkins and Lawrence Krauss as 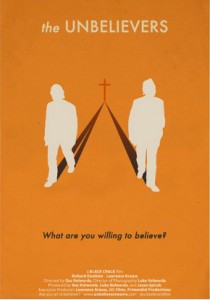 the two renowned scientists travel the globe and talk about science, politics and religion, debuted last April at Toronto’s Hot Docs Canadian International Documentary Festival. I attended the event and the Q&A with Krauss and Dawkins that followed and the film was very well received.

If you want to catch the film, it is showing at this Saturday, 6:30pm at the Imagine No Religion 4 Conference in Kamloops, BC or if you are lucky enough to have an American iTunes account, you can download it there June 3; when I have more information about a Canadian release, I’ll provide an update.

Meanwhile, you can view the trailer here.