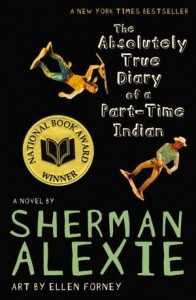 Thank goodness Brady Kissel, a Mountain View High School student, protested the ban with a petition of 350 signatures. She rightly stated, according to the Idaho Statesman, that she did so because of “the very idea that our education is being censored.”

Sadly, the ban remains but according to Aja Romano who reports on the Daily Dot site, the teens may not have gotten the book reinstated, but they got the attention of Sara Baker and Jennifer Lott of Washington who organized a $3,400 crowdfunding project and partnered with Rediscovered Books to distribute books to each of the 350 students who signed the petition.

So, with all those books to give away, Brady Kissel went to Kleiner Park in Meridian to distribute them as part of a national book giveaway event called World Book Night, which aims to “put a free, ultra-readable book into the hands of a reluctant reader”. The Absolutely True Diary of a Part-Time Indian, fits the bill perfectly because according to a teacher at Kissel’s school, it encourages non readers to read. The piece in the Idaho Statesman reports:

Stacy Lacy, a Meridian teacher, countered that the book appeals to many teenagers. She told the story of one boy who was turned off reading and was in summer school – a boy who was glued to his cellphone instead of doing his work. But when he got the book, he “devoured it and passed the class,”

The book was very popular at the event and the teens gave away all but 20 copies.

But then angry parents, actually phoned the police to come to the World Book Night event and put a stop to the distribution of this book! Yes, you read that right….parents actually thought the teens were breaking the law distributing this book.

What world do these parents live in? Do they really think everyone should live according to their antiquated view of “morality” and that this view can be enforced through the force of law?

Happily, the police didn’t see a problem with the distribution of the book and according to the Daily Dot, Alexie’s publisher, Hachette Book Group, is sending an additional 350 copies in response to the hassle the teens received from irate parents. Good on them! I plan to purchase this book to support the author, the teens and free speech!