We leave it in God’s hands. If it is in his will that somehow we get a contagious disease, like in this case the measles, there are other ways, of course, to avoid this. If we get sick, he can also heal us from it.

I bet you can guess who said this – yep it’s a religious leader: Rev. Adriaan Geuze from the Reformed Congregation of North America in Chilliwack as reported in the Vancouver Sun. Thanks to the reverend and his medical advice, there is now a measles outbreak in Chilliwack, BC with 100 suspected cases showing up at a religious school where the vaccination rates are, of course, low.  Thanks to these folks, the measles outbreak has spread into the general population and special vaccination clinics are now being offered.

Last year, we saw a measles outbreak in Wales, there was a recent one in New York and now this one in BC. What does it take to convince people that vaccinations are necessary? At least Jenny McCarthy got a tweet full of fury when she asked “What is the most important personality trait you look for in a mate?” Some notable replies include:

Now we all know that Jenny was wrong; vaccines don’t give you autism because that whole Wakefield fiasco was exposed and the bad research retracted from the medical journal, The Lancet (for a great explanation of the whole thing, watch this video explained on Khan Academy and pass it on to anyone that thinks there is an autism and vaccine link). Yet, on top of anti-vaxxers, we are now seeing a surge in religious opposition to vaccines or at least we are hearing about it more as people prefer to receive their medical advice from a man who uses a bronze age book that’s been copied over and over probably with errors, translated from a few different languages and contested amongst various religious sects, than a person using information obtained through the rigour of science.

I have an appointment next week to make sure my vaccines are up-to-date. You can’t be too careful with herd immunity waning. If anyone asks you why someone’s unvaccinated kids are a threat to others, point them to this helpful list: 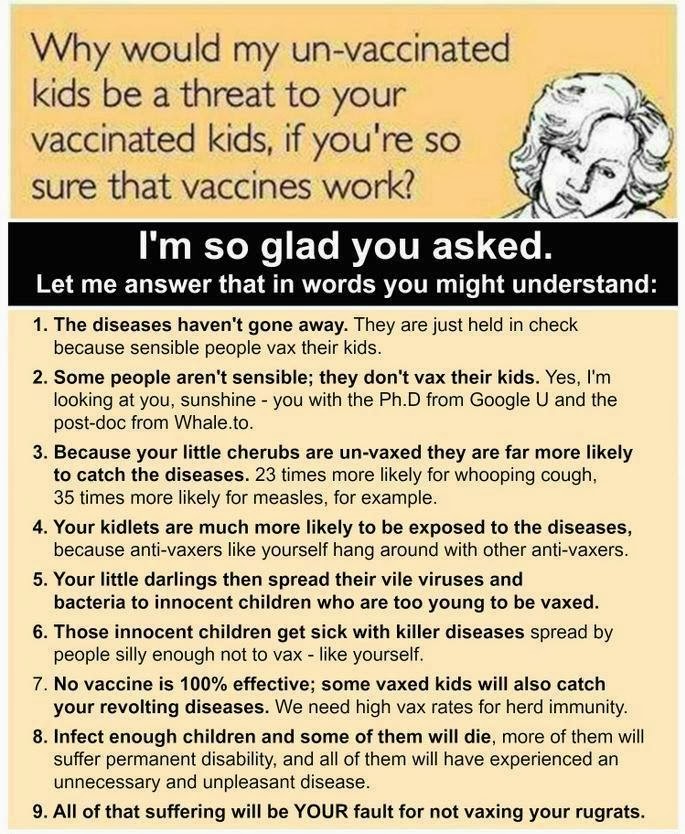