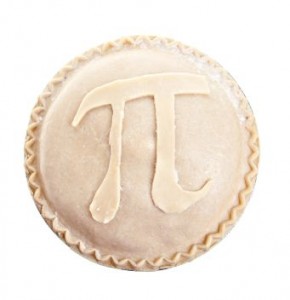 Oxford Dictionaries’ Oxford Words blog is celebrating Pi Day with a post entitled “Pi Day: or the world of homonyms, homographs, and homophones”:

Today is Pi Day, a day, presumably, when all things 3.14159 are celebrated. Unless I have made a typo in the first sentence, it should be obvious that you should not be expecting lots of “Who ate all the pies” chants as we honour the humble pastry case with filling. Similarly, the numismatists among you should not be rubbing your hands in anticipation at the idea of paying tribute to a former monetary unit of India and Pakistan. Which is a roundabout way of saying that while you might wonder:  1. Why there is a specially designated day for this and 2. Why it should be this particular day*, seeing it written down in black and white should cause no confusion. Consider, however, if you heard this sentence read aloud – then it might not be so simple.

Welcome to the world of homonymy – a place where words have the same spelling and pronunciation, but different meanings and origins.

Strictly speaking, not all of the examples above are homonyms of each other. Pi the number is spelled differently from the foodstuff and currency (although those two are indeed homonyms). Yet it can be used as something of an umbrella term to gather together this kind of phenomenon. With true homonyms (in which spelling and pronunciation are exactly the same), context is your only friend, as the word in isolation won’t give you any clues to meaning, and neither will saying the word out loud.