Good grief, the degree someone speculates about someone who is different from himself is truly staggering. It seems that Pat Robertson, in answering a concerned letter asking what could be done with someone’s hell-bound atheist co-worker, speculates that this woman (the atheist) must’ve been that way because she was abused as a child. Probably by her father. And also raped. Maybe while reading scripture.

There is just so much stupid here, it’s hard to know where to start so I’ll just leave this picture of Sheldon Cooper and we can all silently think about how religion tries to marginalize dissension. 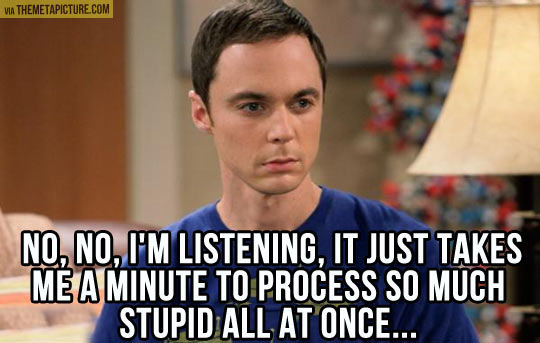 Luckily, it’s not the mediaeval period or that woman might’ve been burned as a witch! You can read more here: Pat Robertson: Atheist women were likely raped, and that’s why they reject Jesus | The Raw Story.

One thought on “Pat Robertson – Marginalizing Atheists with Talk of Abuse”